You are here: Home / Airstream / Brake and wheel bearing maintenance

Since I wrote a book about Airstream maintenance I feel a certain pressure to keep my own Airstream reasonably presentable and in good condition.  Had I realized I would feel this way before I might never have written the book, since once in a while it would be nice to be lazy about things.  But now if something catastrophic happens that I could have avoided with proper maintenance, nobody will ever let me hear the end of it.

So with this mind I planned ahead for our trip.  It has become routine in the past few years for Super Terry and I to do a few light maintenance items on the Airstream in the days leading up to Alumapalooza.  This year we decided to repack the wheel bearings, a job we do about every two to three years.  The industry recommendation is to do this service annually, but since we tow our Airstream a lot (using the bearings is better then letting them sit) and we are mostly in a dry climate (water contamination is a common problem for the grease) I choose to let it go a little longer. 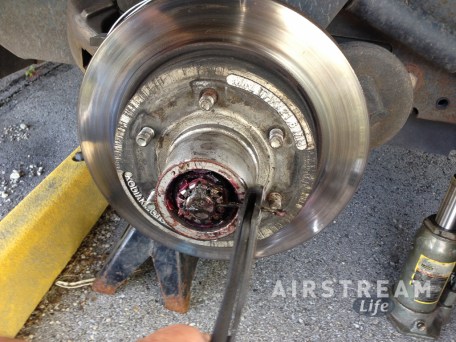 This time Super Terry decided the bearings looked a little worn and he called for total replacement.  This was probably overkill, as really only a couple of the bearings looked slightly questionable, but my philosophy has been not to economize on maintenance issues.  I could probably get a couple more years out of the bearings without a problem, but it wouldn’t seem like much of a savings if a bearing failed on the road.  The result could easily be that we’d need a new tire, axle, bearing set, and possibly some body work if the wheel came off.

As it was, we have gotten 12 years and probably over 140,000 miles of service out of these bearings. They were original equipment.  I can’t complain about not getting my money’s worth out of them.

A full set of bearings (8 pieces in total) plus races was about $120 at the local parts stores in Wapakoneta OH.  Pulling the wheels and replacing the bearings took half the day.  It probably would have taken Super Terry only about two hours at his shop, but we had a lot of people dropping by to ask questions.

The brakes, by the way, looked excellent.  We are getting absolutely amazing service from the Kodiak disc brakes with semi-metallic pads.  We installed these pads in January 2010 and since then have only replaced one set in May 2013 that wore out prematurely due to a lubrication failure. No service was needed on this inspection, which is great news.  Likewise, I’ve been super pleased with the Dexter brake actuator we installed in January 2012—absolutely flawless.

There were a few other minor maintenance items we covered that weekend, but I’ll talk about them in a separate blog this week.