I just got back from the annual RV Industry Association trade show, which is held in Louisville, KY the first week of December each year.  This is a trip I normally dread, because it’s right after the Thanksgiving travel season and the airplanes and convention center are inevitably filled with people who have viruses to share. Being a human virus magnet, I almost always get sick.  And it always rains in Louisville this time of year.

So it is with great trepidation that I force myself to leave sunny southern Arizona to spend a few days under the big tungsten lights.  But this year, I’m glad I did.

Sometimes the big draw for me is the chance to see the latest things from Airstream.  This year the big draw was the knowledge that the RV industry has fully escaped the doldrums of the recession and for the past year the manufacturers have been cranking out product at full speed.  The RV industry is a “leading economic indicator,” which means that when the RV industry speeds up, the rest of the economy is not far behind.  (Of course, this goes both ways—about eight months before the Bush administration admitted we were heading into a recession, we knew the bad news because RV sales had already plummeted.)

I was looking forward to smiling faces and busy people at RVIA, and I was not disappointed.  For example, Brett & I were approached by our friend, the president of Zip-Dee, who suggested that perhaps we should suspend his full page ad in Airstream Life for an issue because, “everytime it comes out our phones go nuts for two weeks, and we can’t keep up!”  Only in boom times will you hear such a complaint.  (Instead of suspending his ad for the super-cool Zip-Dee motorized awning, we are going to run a different Zip-Dee product ad in the Spring issue.)

Airstream, you may have already heard, is having the biggest year they’ve seen in decades.  In terms of dollars of sales, it’s their biggest year ever.  The Airstream Interstate motorhome continues to be the best-selling Class B moho in the industry, despite also being the most expensive.  Trailers are flying off dealer lots, and the production backlog is several months long.

Despite knowing all this before I went, I was absolutely astonished at the level of bullishness we found at the trade show.  We signed more new advertisers for Airstream Life on the spot than we have done in the last three or four years combined.  We found eager new sponsors for our R&B Events, including Alumapalooza and Alumaflamingo (we’ll announce those when the deals are finalized).  Every aftermarket manufacturer we talked to was interested in sending someone to represent their company.  The Grinch of prior years was thoroughly banished.

What’s behind this?  Well, recessions don’t last forever.  Also, the baby boomers, who have been retiring in droves for several years, are eagerly buying Airstreams so that they can finally indulge life-long fantasies of freedom and travel.  Airstream says about half of their new buyers are new to RV’ing entirely, meaning that they went from nothing to an Airstream.

This has changed everything, no exaggeration.  The content of Airstream Life, the content of our events, the future projects I’m working on, the design of Airstreams, dealerships—nothing is untouched by this massive change.  It used to be that Airstreams were the trailers you ended up with after years of climbing your way up the ladder through lesser brands, but now we have all these newbies showing up who very suddenly want to live the dream.  So everyone who makes, sells, or supports Airstream has to look what they do and figure out how to do it differently.  I think this is great fun.

In terms of new products, we saw only a few things of note.  The re-boot of Trillium fiberglass trailers seems to have faltered a bit, but they are now being sold by Great West Vans as the “Sidekick Trillium“.  Certainly well worth consideration by anyone looking for cute weekender on a budget.  Jayco was showing a European spec caravan to attempt to show American dealers how EU models can make a lot of sense. 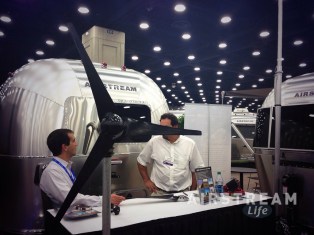 The guys at Primus Windpower picked up the pieces from another RV wind power company that failed last year, and will be having a product re-launch in 2014, which I’ll be watching.  The Airstream Interstate has been updated for the new Mercedes Sprinter chassis, but it’s essentially the same as before, meaning quite long and very plush.  Likewise, the $146k “Land Yacht” trailer has been updated a bit. 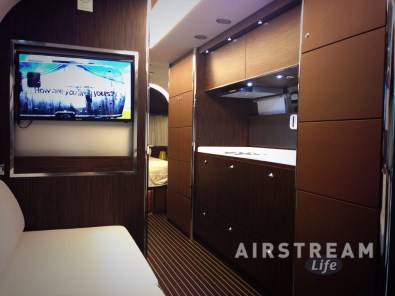 We met with Dicky Riegel of Airstream2Go to talk about his new Airstream trailer rental business.  He showed us the incredibly cool app that they give, pre-loaded on an iPad Mini, to each rental customer.  It has maps, explanatory videos, helpful guides, checklists, equipment lists, even song playlists.  It’s first class, and I was very impressed.  Sometime next year it will also have a full set of Airstream Life back issues pre-loaded, too.

I have to admit I was a skeptic about the concept of Airstream2Go, but Dicky seems to have found and tapped into a base of well-off customers who really want to rent new Airstream trailers for a “vacation of a lifetime” but don’t want to buy one.  If that’s you, there’s no better option than Airstream2Go. 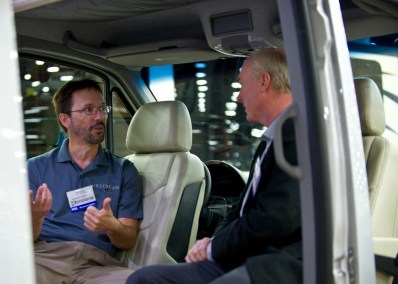 I also had a rare chance to sit down with Andy Thomson of Can-Am RV.  Andy writes a series on towing that we publish in Airstream Life.  His last article, about load capacity, really tweaked a few people because Andy showed how some cars which aren’t rated to tow much at all can actually perform better than the traditional pickup truck.

A few people asked my why I’d publish such an article (which gored a sacred cow in the towing world), and I tried to explain that the discussion of the vehicle and hitch dynamics helps us all understand what we are doing.  You don’t have to like Andy’s choice of vehicle to benefit from his knowledge, no matter what you drive.

The same people typically suggested that I shouldn’t publish such articles because (a) I’d get sued; (b) “somebody will get killed”; (c) Andy doesn’t really know what he’s talking about.  I don’t buy any of those excuses.  My response is usually that you may not agree what you read, but don’t ask me not to publish it.  Cancel your subscription or flip to the next page.  I believe in the free exchange of knowledge and I’m not in favor of quashing new thinking.  If you pay attention with an open mind, you might just learn something.

I tell ya what, I certainly learned a few things this week.  In addition to all of the above, I learned not to eat the egg & guacamole biscuit thing at the hotel breakfast buffet.  By 4 pm on the final afternoon of my trip I was feeling a bit “off,” and by 11:30 pm I was doubled over in agony.  Didn’t sleep much that night.  My personal “Louisville curse” got me again.  On the plus side, I also learned that Louisville airport has very clean bathrooms, after visiting several of them in the pre-dawn hours the next morning while waiting for my flight.

Well, as my associate David told me, “a stomach bug is a small price to pay” for a successful week.  (Of course, that’s easy for him to say.)  My take on it is that I learned, I lived, and overall I’m glad I went.   Of course, there is one other bit of sobering news to consider:  this means I have to go again next year.