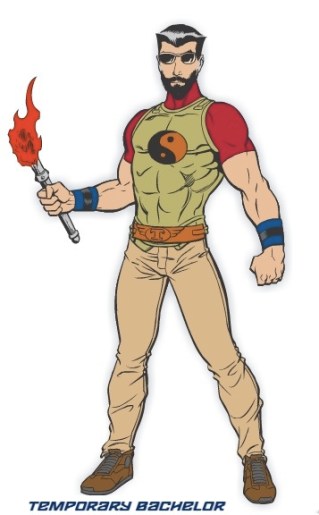 Right now he is lurking in his secret lair, but soon that superhero of summer, Temporary Bachelor Man will appear.

It has been too long since he donned the Mighty Vest Of Masculinity, slipped on the Sacred Sunglasses Of Limited Eyesight (e.g., ne-cherchez-pas-la-femme), lifted the Flaming Torch Of Bachelor Cooking, and wore the all-powerful Cuffs Of Household Servitude.

Each summer I take a few weeks away from the Airstream to fly back down to southern Arizona and bake in the heat, solo. It’s a great opportunity for me to get serious projects done, since there’s nobody else here and little going on to distract me.

This means I tend to put my head down and tackle those projects that have accumulated in the first half of the year. It’s much like hacking away at an overgrown kudzu in the back yard, except it’s in my brain. After a few weeks, things are much clearer and the mental constipation that comes from having too much unfinished business is gone.

But there’s a real risk of being over-focused.  I could easily end up resembling Howard Hughes in his final days cooped up in his penthouse at the Xanadu Hotel.  I get so engaged with my projects that it is easy to forgo the niceties of shaving, eating, and engaging with humanity.

That’s the reason for TBM.  His heroic character inspires me to escape laptop computer bondage once in a while, and go explore Tucson for those little details of the city that I would miss in the busier snowbird season. TBM is a mighty tester of local restaurants and food trucks, prowler of odd corners and back streets of Tucson, and watcher of movies featuring absurd testosterone.

In other words, there’s nothing like a little deprivation to make you appreciate what you have.  “Nothing going on” means there’s reason to go digging a little deeper, which means just going out and poking around until something (a historic building, a cultural event, a rattlesnake) emerges.

Tucson is a curious city and most people miss that fact. It’s the only city I’ve ever seen that has dirt roads and horse ranches right in the middle of everything. It has all kinds of strange and historic neighborhoods that are so cut off by latter-day road projects that you almost can’t get to them without knowing the secret route. In a country driven by chain-store development, the illogical corners and little urban mysteries are exactly what I like about the place.

Last Sunday I picked up my buddy Nate for a day of cruising the parts of inner Tucson that we had no business visiting, looking for interesting things. It was perfect weather for it: 107 degrees and blazing sunshine ensure that very few other people will be out, so whenever we found something worth photographing we could simply stop the car in the middle of the road and take our time. It was a uniquely Tucsonian thing to do, and given a liter of water per person for a half-day, I would recommend it to any urban explorer.

One easy aspect of Tucson to explore is food.  For such a small city, Tucson has a remarkable range of cuisine. I don’t know why. Restaurants keep popping up and disappearing, so much that I once calculated I could visit a different restaurant five days a week for a year.

Sadly, half of them would be hamburger places. I have nothing against hamburgers but I don’t know why we need McDonalds, Wendy’s, Burger King, Five Guys, In’n’Out, Whataburger, Smashburger, Monkey Burger, Blake’s Lotaburger, Zinburger, Freddy’s, Fuddruckers, Culver’s, Diablo Burger, Graze Premium, All American Burger, and many other local spots.  They’re mostly good, but a dozen or so chains selling essentially the same product is not the definition of “variety”.  Hamburger joints are second only in number to the Mexican restaurants, but since we are only 70 miles from Mexico I can understand better why those are plentiful.

One of my TBM goals this year is to explore new and different local restaurants.  I think the only way to know if you’ll like a place is to actually eat there.  Yelp, in my opinion, is worse than useless.  Too many of the reviews seem to be from whiny people talking mostly about themselves and complaining in a most disgusting tone of entitlement about how the waiter didn’t bring their ice water fast enough.  I have found several real gems of restaurants that I love, and every single one of them is panned mercilessly by the self-absorbed Yelpers, people who think Cajun cooking comes with red sauce because that’s what they get at the mall Food Court.

Whoops, did I just go off on a rant there?  I was going to say that my prowl with Nate ended up at a local Indian cafe and market, which wasn’t bad at all for a late lunch, and that seemed like an excellent reward for our efforts. My goal therefore, for the two weeks I have left as TBM, will be to explore other local hidden restaurants as frequently as I can.

Now, I won’t be telling you about what I find unless you come to Tucson. In our new world of crowd-sourced information, there’s benefit to keeping a few things quiet. A quick way to ruin a good local attraction is to tell the world about it. But I mention this as a suggestion to you.  If you live in, or near a place that you have never really fully explored, perhaps it’s time to do so.

By this I mean walking or driving through the places you have never had reason to go to, just to see what’s there.  Walk along the river that runs through your city (or in our case, the dry washes). Check out that bike path, even if you have to do it on foot.  Try a hole-in-the-wall restaurant and banter with the waitress. Waltz into that bookstore in the old brick building. Make a list of odd places you’ve seen and start ticking them off, one by one.

Then you’ll have adopted the heroic and expansive attitude of Temporary Bachelor Man, Discoverer of the Unexpected. It’s just like traveling in the Airstream, only very very local.  So I predict you’ll be surprised and somewhat invigorated by whatever you find.

Just now I was winding a watch.  Remember doing that?  Decades ago we all had mechanical watches, and spending a few seconds every day casually winding the little crown was just something you did without thinking much about it. 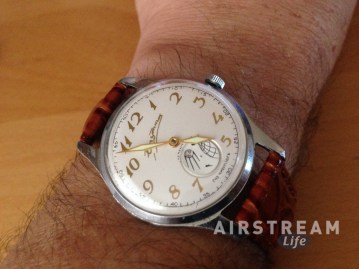 I like the little break that winding a watch requires.  Like pausing to scratch an itch, or sneeze, or tie your shoes, it’s just a tiny moment when you aren’t expected to do anything else, and it buys you a fraction of the day that’s all your own.

That might seem very trite but consider that tennis champ John McEnroe used shoe-tying very effectively to throw off his opponents and grab a mini-break during intense matches.  Every moment counts, and some can be made to count more than others.

In the case of this watch, which happens to be a Soviet “Sputnik” (Спутник) watch made in 1958, there’s a comforting little zik-zik sound that I like to hear. I’m not sure why. Perhaps it’s because it reminds me that the watch is a fragment of history in itself, a commemorative item made in the First Moscow Watch Factory near the peak of the Soviet Union.  Just knowing that tickles me.

Perhaps it’s simpler than that.  I have to admit I like to see the little Sputnik dial rotating as the seconds tick by.

The ticking reminds me that this is an entirely mechanical device—no transistors, chips, battery, LCD display—made from tiny bits of geared metal and even tinier synthetic ruby bearings, lightly lubricated by oil, designed in the slide rule era, and powered by a few seconds of zik-zik every day. Such devices are virtually unknown and unappreciated by most people born in the 21st century, but since they still work (in many cases far better than their modern equivalents) I think we should all remember them.

I’ve written before about my penchant for vintage devices, which seems to have gotten more acute as I’ve grown older. It’s not nostalgia; most of the mechanical things we have were designed and obsolete before I was born.  I don’t recall my mother having a 1948 Mixmaster, but I love the one Eleanor inherited from her father.  My fascination is probably because of my father, who was trained as a machinist in his early career, and who had a basement full of fantastic devices for turning metal into mechanical wonders.

As a child I could not understand most of the tools.  I knew what his lathe could do, but not why I would have any practical reason to spin metal shavings off chunks of metal.  I loved hefting the weight of his micrometer and spinning the handle to watch the scale climb with uncanny smoothness.  It was a device of intriguing precision (which we associated so much with him that it was brought out at his memorial ceremony). But at no time did I have any idea what I might measure to a thousandth of an inch. I still don’t—but I like that tool.

My father made, among many other things, devices called Goldblatt Clamps.  He was so useful at making such things that he was given a deferment from the Korean War for a while (he went later). We still have a box of the clamps, made of precious metals such as silver and gold.  I have no use for Goldblatt Clamps but the mere idea of them is strangely compelling.

So perhaps for the reason that I grew up among machines, I have great respect for them.  The things engineers made in the 1950s and 1960s blow my mind to this day.  (One good example is the famous SR-71 “Blackbird”, which is still the fastest and highest flying aircraft ever made. It was designed on paper, 33,000 sheets of it.) 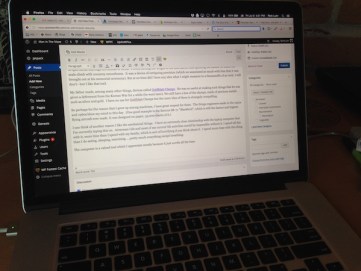 I can think of another reason I like the mechanical things.  I have an extremely close relationship with the laptop computer that I’m currently typing this on.  Airstream Life and most of my current life activities would be impossible without it. I spend all day with it, more time than I spend with my family, which is sort of horrifying if you think about it.  I spend more time with this thing than I do eating, sleeping, exercising … pretty much everything except breathing.

The computer is a valued tool which I appreciate mostly because it just works for its intended purpose, but it’s essentially a disposable black box. It can be opened but mostly what you’ll see are more black boxes. It works on principles that I intellectually understand but which I cannot touch, and it will inevitably fail for reasons that I cannot determine.  When that happens, it will likely not be repairable.

Thinking of that, I look at the watch I’m wearing today. It is the antidote to short-lived black boxes. An assembly line of Soviet comrades made this watch 58 years ago and it still works. It may work for another hundred years, given an occasional cleaning and lubrication.

Sure, it only does one thing, but that’s not its key value anymore. Now it is a bit of history, a reason to take a 30-second break each day, and a spark of perspective to counter the crazy smartphone world we inhabit. That’s worth more to me than knowing the current time with atomic precision.

You might wondering if I’m ever going to talk about Airstreams in this blog. I think I’ll leave making that connection to you, if you see one.  Feel free to add your thoughts in the comments.

(PS: Temporary Bachelor Man will be posting next.)