You are here: Home / Archives for Recipes

We’re getting serious about gearing up for travel now. The Airstream has been stored all summer in the most unfavorable conditions: exposed to sun, rain, falling tree branches and leaves, in a humid environment, and used essentially as a giant storage locker.  It is our joint mission to turn it back into a habitable travel trailer in the next 48 hours. 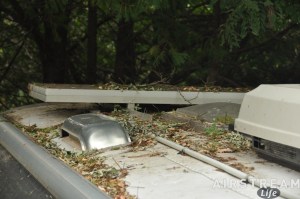 It’s always best to work from the top down, so I started with the roof disaster.  The debris was so thick that the first step was to get on the roof with a broom and sweep away most of the accumulated branches and leaves.  It was pretty nasty up there with older leaves that have composted and filled every possible corner and crevice — worse than I remember from the previous year.  I think an extra layer of tree bits landed in the past week thanks to Irene.

Then I got into the detail work, using only water and a soft brush.  I never use soap on the roof because there’s too much chance of slipping off.  Working outward from the centerline is most efficient, as things tend to wash down to the sides. 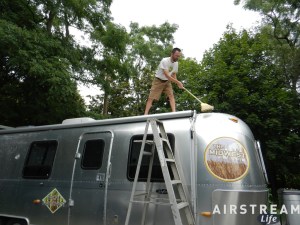 It took quite a while to clean up the detail spots, like beneath the TV antenna, under the solar panels, the upper gutter of the awning, and around the refrigerator vent.  The work would go faster if I wasn’t working on a wet sloped roof with numerous delicate obstacles (like plastic roof vents) and hardly any open space to stand.  I recommend extreme caution if you ever do this.

The rear solar panel was so obscured by tannin from decaying leaves (far more gunk than you can see in the top picture) that I had to spend several minutes scrubbing it.  A small amount of brown stain on the glass can have a large impact on electrical generation capacity. 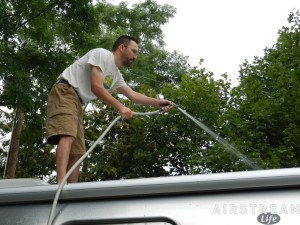 Once the roof was done, I gave the rest of the trailer a conventional wash.  I got the bulk of it with a telescoping brush and Eleanor followed up with a plastic scrubber, cleaning up the details. Even after our efforts, the trailer will win no prizes in a Concours d’Elegance but at least it is no longer embarrassing. If I have time today, I’ll also wax the front dome, as that seems to make it easier to clean off squashed bugs later.

Getting ready to go is obviously important.  (I spotted a tree turning color yesterday — a warning sign from Mother Nature that the cold weather is coming.)  But we’ve got other important things we must do before we leave, including eating birthday cake.

We missed the normal time to celebrate my birthday (in mid-August), because I was in Tucson.  Being of a certain age, I am not really all that hung up on birthdays, but for some reason my birthday is a well-attended event every year.  I am pretty sure that the entire family takes an interest in my birthday primarily because Eleanor always makes a special cake with butter-cream frosting, and each year the cake is different.  Usually a few weeks or months prior, I dream up a rough idea and then Eleanor figures out the details.

The cake this year stems from the fact that I am an admitted and unrepentant maple fiend.  There is no ten-step program for people like me and if there were, I wouldn’t follow it.  The Addison County Fair (held in August) is my annual maple pig-out, but again, I was in Tucson and missed it this year.  You have no idea what a serious loss that was to me.  The Fair has an entire building dedicated to all things maple.  Maple frosted donuts, maple milk, maple creemees (“soft serve” to the rest of you), maple milkshakes, maple bread, maple candies, and this year they added some sort of baked confection that had walnuts on top.  Having been entirely deprived of all these goodies in maple-free Tucson, I requested a maple-walnut cake for my late birthday celebration.

So Eleanor did some research and has developed her own recipe, which starts from scratch.  Some of it is roughly based on an Italian cream cake recipe that we got from (believe it or not) our insurance company USAA some years ago, but at this point Eleanor has modified it so much that it is truly her own.  The cake contains about $30 of ingredients, as real maple sugar and such things are rather expensive, but as I often point out to anyone who will listen, I’m worth it. 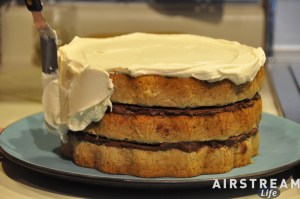 The cake, which you can see here during construction, is not only maple-flavored batter with fine-chopped walnuts, but between layers contains a whipped chocolate ganache with maple flavor.  (If you’ve never tried maple and chocolate together, you need to.  I can recommend the maple crunch chocolates from Lake Champlain Chocolates as a source for aspiring addicts.)

The final layer is a maple butter-cream frosting that literally melts in your mouth, leaving a buttery coating and a strong desire for more.   So we’re looking at triple maple cake with walnuts and chocolate ganache.  Talk about decadence … there will be no leftovers.

There are a few other rituals that we must complete before departing.  Last night, for example, the humidity and temperature rose and so I was finally motivated to go jump in the lake.  Lake Champlain is running a bit cooler than normal, due to all the rain and storminess (which stirs up cold bottom water).  It’s a “refreshing” lake at the best of times, usually peaking around 68 degrees, and I think yesterday it was a few degrees cooler than that.  But this is what I grew up on, and I’m used to it.  On a sticky afternoon it’s just right — a thrillingly icy splash as you dunk under for the first time, and then in just a few minutes your body core is cooled down and it feels like no amount of heat and humidity will ever bother you again.  Emma and I got in and played a few splashing games.

With that, another summer tradition has been accomplished.  Only a few things left to do.  It looks like we’ll be ready to hit the road by Tuesday.