You are here: Home / Airstream / To love me is to love my Airstream

I think the aspect of Airstreaming that I love most is that it cannot truly be defined. Life aboard the Airstream is whatever you choose to make of it: an almost overwhelming array of choices enabled and even encouraged by the simple idea of bringing your home to your interests rather than waiting for them to come to you.

I have seen people in their Airstreams thrilled by the prospect of hiking a glacier, while others are thrilled by the prospect of a trying out an interesting donut shop followed by a good double espresso. The size of the adventure does not matter; both are valid. It only matters what you desire to achieve. If it’s important to you, the Airstream is ready to facilitate your journey.

I’ve seen people crying away the pain of recently-lost love, and others striking out with quivering anticipation in search of a new life partner. But it doesn’t have to be a choice, because you can load your Airstream with memories of your life while building fantastic new ones. The Airstream does not care if you are sad or elated, it will cosset you with warm blankets and familiar foods at the end of the day regardless.

This season of travel has been unlike any other for me. On the surface, the Airstream has done what it always does. It has been my home away from home base since mid-May, allowing me to visit close friends in the Gulf Coast states, then to participate in Alumapalooza in Ohio, explore more of New York state beauty, and finally hang out with family in Vermont. It has carried the material to run a pop-up store, and the accessories needed for long-distance bicycle touring, urban explorations, motorcycling, hiking, and more.

Beneath that practical layer the Airstream has opened doors I did not expect. I’ve often said that that the Airstream is excellent lock-pick (it opens doors everywhere it goes) because people are often attracted to the dream of running off to adventure and thus are eager to share their world in exchange for a few hours of vicarious living.

While that’s still true, this spring I realized that the Airstream also helps me meet people by virtue of what it is not. Isn’t it true that there’s an instant bond with someone who says, “You have an Airstream? That’s so cool!” You can tell instantly that person is destined to be a compadre, an appreciator of the traveling lifestyle, like-minded and ready to hear more about your travels.

The flip side of that is the person who hears “Airstream” and calls it a “camper” or “mobile home”—or worse, avoids mention of it at all, treating the core of your living situation as a dank secret best swept under the rug. I think some of those people feel that they are somehow doing a favor, as if the Airstream were a facial blemish that everyone can see but nobody in polite society would dare to point out. If it’s not a traditional house or apartment (so the logic goes) choosing to live in a “camper” for part of the year must be a symbol of your reduced circumstances. Given the price of Airstreams nowadays this is not logical but it is surprisingly common thinking.

Sometimes those people can be taught to appreciate what the Airstream represents. It’s worth a try. After all, you wouldn’t want to miss out on a potential friend (or even the love of your life) just because she cluelessly called it a “camper” a few too many times. I’ve heard of and experienced this phenomenon myself. But I actually appreciate that a certain category of individual will permanently avert their eyes, and thus reveal that they are not very open-minded. It saves time.

Pet-owning friends of mine have said, “to love me is to love my animals” and similar platitudes. I get that—whether it’s your children, your dogs, cats, or budgies. To love me is to love my Airstream. You don’t have to live in it. But you do have to understand that it is the floor that I walk on. Without it, a huge part of my life would vanish. I wouldn’t be able to have the experiences I’ve had, my family would never have seen the 48 states, and I wouldn’t be the person I am. The people destined to be friends and partners know that instinctively and they embrace it. 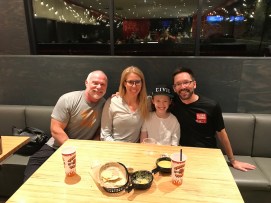 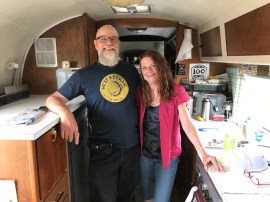 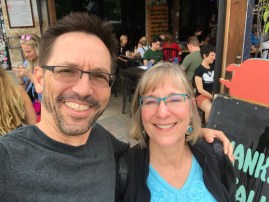 This spring and summer I’ve met and reunited with a few such people, which I regard as the biggest win of the entire year. Long after the travel memories have faded, I hope to have them in my life. For me, this season, the Airstream has facilitated the beginning and the furtherance of wonderful relationships. It brought me to my interests and it will continue to do so in the future. You gotta love that. 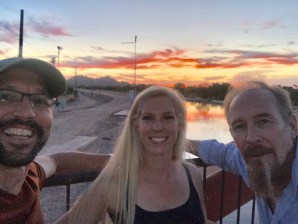 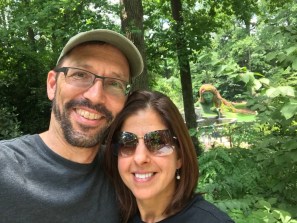