Our good friend David Neel has been organizing a “Vintage Trailer Bash” in Buellton CA for eight years, and each year he very kindly invites us to attend. Normally we’re still traveling somewhere far away from California in September (except last year when we were busy with Alumafandango) so we’ve missed out.

But not this year! Coming back to Arizona in August has its perks, and one of them is being able to hitch up the old Caravel for a 600 mile road trip to the gorgeous Pacific coast for a rally.

The only problem was that the Caravel hasn’t been used much over the past few years, and storage is never kind to a travel trailer. Even though we have kept it out of the sun in a dry desert climate, inevitably things get funky. So I ended up replacing the spare tire, battery, and a few belly pan rivets. The toilet valve was stuck, the entry door lock was stubborn, the bathroom vanity needed a latch re-aligned, some screws and nuts had magically vibrated loose or gone missing, the dump valves had begun to leak (uck) … you get the picture.

Airstreams really prefer to be used rather than stored. Even in ideal storage conditions, stuff happens. In our climate, rubber seals go bad and lubricated parts dry up. I wasn’t surprised we had to do some maintenance, and overall I was pleased that it was as mild as it was. The fundamentals of the trailer were all still good: no weird smells, no rot or leaks, appliances all fine—so with a few days of part-time tweaking and lubricating we were ready to go. The final step was on the second day of travel: we stopped at a car wash in Blythe CA to get the dust off and were feeling pretty good about things. 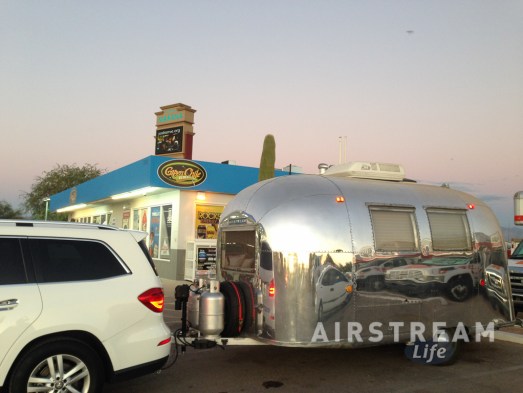 Of course it wasn’t quite that easy. Something had to happen. See that white blob on the roof (the AC shroud) in the photo above? After a few years the plastic shroud covering an RV air conditioner tends to get brittle and crack, and then come loose.  Apparently, ours suddenly departed the Caravel somewhere along I-10 in California—unbeknownst to us— and so we arrived at the rally with a naked air conditioner. It gave the trailer a bit of a “Mad Max” look on the roof.

(I have since ordered a replacement shroud which will be at our home on Friday. It’s a simple matter of four screws to put on a new one, so not a big deal. I have no idea where the old one is. Upon landing it undoubtedly experienced a RUD.) 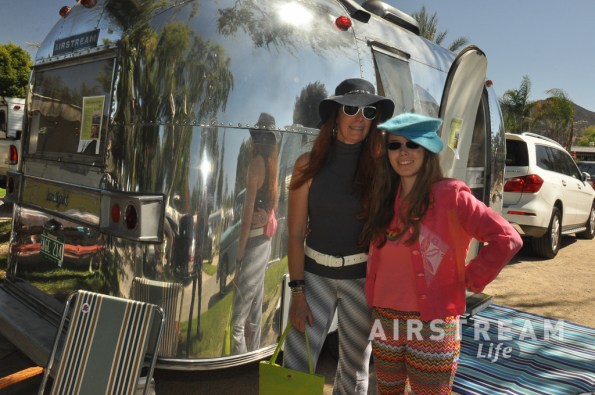 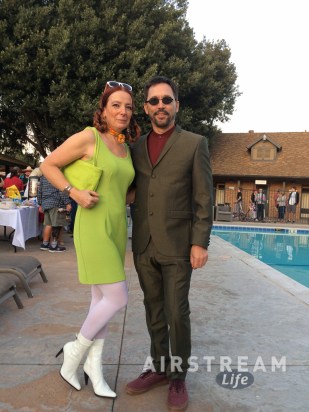 The rally, in case you are wondering, was fantastic. David really has found an ideal mix of trailerites and activities, and the result is a fun time with a lot of cool people. In fact, the rally is so popular that it sells out in a matter of days, so David has had to deal with a lot of flack from people who want to attend but couldn’t get in. Success has its drawbacks.

We participated in the vintage fashion show and the vintage scooter parade, among other things.  Eleanor made a 1960s dip (which contained of a lot of stuff you’d never knowingly eat today, but which when combined actually tastes pretty good) for the Vintage Appetizer Party. She and Emma missed no opportunities to dress up, including the 70’s Disco Party and the Tiki Party.

Of course we had to watch the vintage movie by the pool (the 1966 Batman movie, fantastically campy), and who would miss the morning “donut truck” on Sunday before departure? When at a rally, diets are forgotten and there is no shame in being goofy. 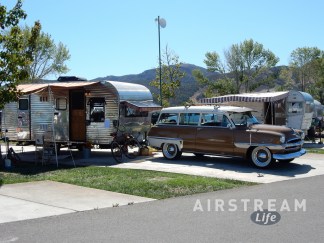 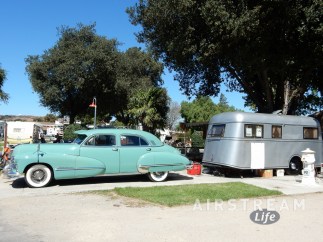 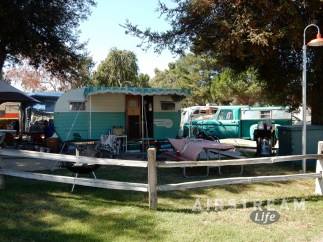 Returning home, I had a mix of feelings about the Caravel. The trip had proved that it is really too small for us, but the trailer is so adorable and relaxing that part of me wanted to keep it. It’s fun to meet up with other vintage trailer owners, and once we sell the Caravel that door will be never be open to us in the same way. 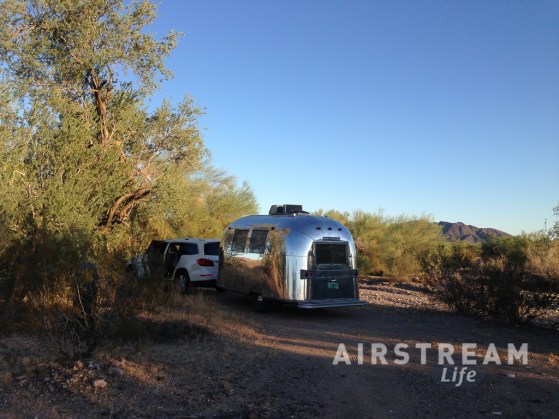 This made our final night, parked in the remote BLM land at Quartzsite, somewhat poignant. I took a picture of Emma sleeping in the trailer, in exactly the same position as that little three-year-old we used to travel with, and realized this was the end.  The Buellton bash was an excellent way to experience it just one last time so we’d all remember the Caravel with a fresh fond memory.

We’ll probably stick close to home for the next month or two, but you never know. Perhaps something will come to entice us away for a few days. In the meantime we’re going to be perfecting the Caravel for sale and planning a longer trip for this winter.