We hadn’t anticipated being out this late in the year.  The original plan was to get home by about Halloween, but we blew through that and have continued to find reasons not to go home ever since.  The current loose plan had us getting home around November 14 but as you’ll soon see, that may change again.

I had forgotten a few of the key considerations when traveling by road during the winter. The big one is that after Daylight Savings Time ends the driving day gets very short, so we have to plan to be stopped by about 5 pm in order to avoid having to get into our campsite in the dark.  When we’re trying to cover 300 miles or more in a day this puts a little pressure on us to get started in the morning.

Other things get trickier as well, such as burning through propane faster and the impact of hurricane season in the southeast.  Since we got to the Florida panhandle the weather has been hit-and-miss (mostly “miss”) with lots of clouds and rain everywhere.  I thought we’d escape it by heading west but we got soaked again in New Orleans, and then all this past weekend in Pedernales Falls State Park west of Austin.

Even with drizzle and mist all day Friday we managed to have a decent time visiting the falls. There are no dramatic waterfalls here, they’re really more of a series of flows over sloping rock, which can become huge and dangerous during flash floods. With rain falling most of the time we were hiking over the rock I think we were all very aware that in minutes the river could rise and wash us away, so we kept an eye on it.

But nothing like that happened. Instead we were treated to a peek at the rocks and fossils that are frequently covered by water, and the tiny pools of captured water that are abundant with microscopic life, and erosion caves at the edge.

And then, lacking much else to do, we went back to the Airstream.  I put on an old movie and Eleanor and Emma made their traditional “rainy day brownies” with ancho chile powder and salt on top.

Sometimes I hear people talking about that inevitable day when they are trapped by weather in their Airstream, and how they need to get a bigger trailer in order to survive it.  Our trailer is pretty big at 30 feet 11″ outside length, but for three people it’s still not a lot of space. I don’t think the size matters as much as your personalities. If you can’t get along for one day inside the Airstream, a bigger one probably won’t help. Try taking up a hobby that doesn’t need a lot of space, or pack some books or movies to entertain yourself.  Or, do as we did and put on your rain jacket and go hiking anyway. The trails won’t be crowded.

Our string of equipment malfunctions continues.  We drove from Pedernales Falls to Seminole Canyon State Park (Comstock TX), and here I happened to do a quick inspection of the Hensley hitch, because … well, that’s what I do.  There are a few things which have given us trouble in the past and so I am extra-sensitive to the potential for failure again, and the hitch is one of those things. 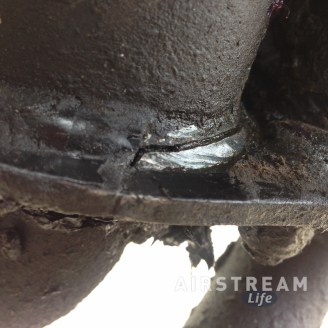 A crack formed in it back in August 2009 and it was replaced by Hensley under the lifetime warranty.  Today I spotted a crack in about the same location, and I know it wasn’t there a few weeks ago when I inspected the hitch in Ohio.

It would be nice if things like this failed in the driveway instead at a remote desert park with no cell phone service.  But I’ve learned you can’t pick your failure points, so the next best thing is to know where to find help.

With this problem I have two basic options: get a replacement from Hensley, or find a local welder to fix it.  I would rather have them replace it since the hitch head is pretty scabby looking anyway (most of the orange paint chipped off years ago and I’ve been patching it with spray paint ever since).  Also, finding a welder would require us to relocate to Del Rio (35 miles away) and stay there for a day or two even if we were lucky enough to find someone with time to do the job on Monday–and that would disrupt our trip.

The crack is not so severe that I’m afraid to tow with it.  I will have to start inspecting the hitch every time we stop, to ensure that the crack is not growing. Using Skype and the campground wifi I was able to leave a message for the Hensley technical support folks (it’s Sunday).

Right now the plan is to continue onward to Big Bend National Park and if we are really lucky a replacement head might be waiting for us by the end of the week in Alpine TX.  If not, we’ll consider alternatives depending on what the Hensley guys say.

That’s a problem for another day. Today we’re going hiking in Seminole Canyon.  Despite the ongoing technical challenges, the trip goes on!