The show is beginning.  We spend all year thinking about Alumapalooza, and when it finally comes together here on a patch of grass in central Ohio, it’s a great thing. Today is the day.

The past few pre-event days have been mellow.  All of the volunteer staff are very experienced at their jobs, and we’ve cross-trained people whenever possible, so if we hadn’t been required to relocate some things as a result of the factory expansion there wouldn’t have been much to talk about.  Everyone would have just gone ahead and done their job without any instruction. As it was, things were still pretty smooth. We’re lucky to have such great people who come back year after year to make this event happen.

A lot of attendees are repeat visitors, too.  We had 25 spots in the Service Center lot for early arrivals to boondock a few nights, and most of them were taken by people who had been here before. They just roll in at their convenience, settle in, and gab with their neighbors. We didn’t schedule anything except a cookout on Memorial Day, but the folks who arrive early generally don’t need scheduled activities to stay entertained. 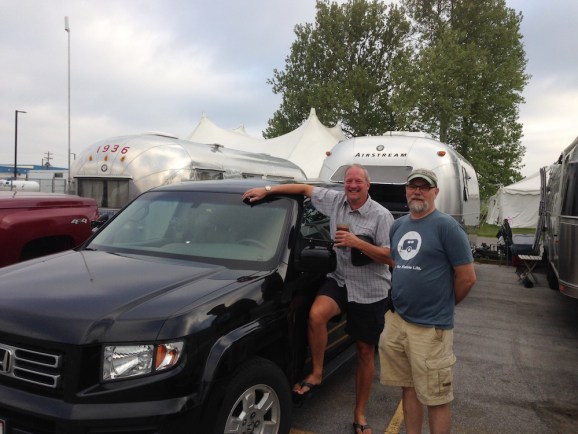 Jackson Center weather is always tricky this time of year, with frequent and un-forecast changes.  When people ask us what weather to expect, we say “all kinds.”  This year has been a great example.  When I arrived it was dropping down to about 42 degrees at night.  Other years it has been 101.  You just never can be sure what’s coming, despite the attempts of the weather reporters to stay ahead of nature. 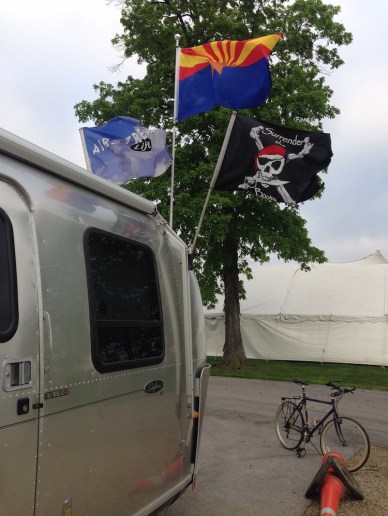 This year the major weather event has been wind, lots of it, which finally got strong enough to make everyone take in their flags, awnings, and patio mats (or stake them down very securely).  I was working on the roof of the Airstream with Super Terry over the weekend, scraping old cracked sealant off the aluminum with a putty knife, so that we could re-seal a couple of spots that might have become leaks. When I’d get a small piece of sealant scraped free, it would sometimes blow right off the roof.

Because of the uncertain weather, we decided to keep the job list to the bare minimum, so all we have done so far is replace the entry door lock and replace sealant in six or seven places.  Sometime this week I’m still hoping we can remove the wheels to check the brakes, but now that the event has started it will be hard to find the time. I might have to get to that job at a later stop in our travels.

The big news has been that E&E will miss Alumapalooza. They had planned to catch up with me by flying to Dayton, but Emma got a cold a week ago and still can’t equalize well enough to fly.  Our only good option was to have them fly to Cleveland next week, where I’ll pick them up as I’m heading east with the Airstream. So I’m still solo in the Airstream and will remain so quite a lot longer than I had expected.

Without Eleanor to back me up, I’ve had to make some adjustments and rely on the support of friends. There’s still plenty of food in the refrigerator but friends here have been inviting me to dinner nightly, which means I probably won’t have to go grocery shopping until next weekend.  That helps a lot, because during one of these events my time is always at a premium.  Our friend Mary has volunteered to throw my laundry in with her family’s on Thursday (she pointed out that Eleanor has done the same for them in the past).  Others have offered help, too. It’s nice to have such good friends. In this community you can almost take that for granted, which is a big part of the reason Airstream has been so significant in our lives. 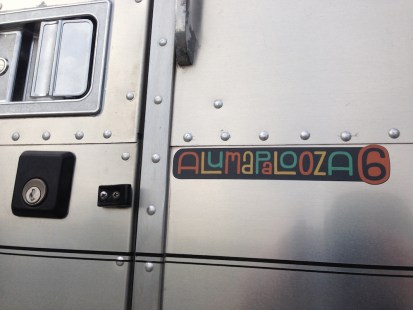 As I mentioned, the factory expansion has changed a few things. We can only park about 50 Airstreams in the main field next to the factory, so Airstream personnel electrified another area closer to the Terra Port, and we plan to put another 50 or so there. This also meant the event tents couldn’t go in the usual spot, but we found a really pleasant location in the shade of mature sycamore trees, right next to the Terra Port.  The grass is nicer, the ground is more level, and we like how it turned out, so we’ll probably do it the same way again next year.

This also means the staff can park in the Terra Port for the entire event. After six years of parking in the field, I think the volunteers deserve the perk of full hookups during Alumapalooza. They work hard, sweating and getting sunburned (or rained on) every day for a week, and at the end of the day they have to haul the gray water from their shower several hundred feet in a portable tank to dump it.  Most of them didn’t get power for air conditioning, either.  We supplied them with ice cold water, laundry service, and a free pass—that’s it.

So now they have a well-deserved better deal. Our new spots in the Terra Port put all of the staff very close to the tents, so they can go back and forth quickly, and if the windows are open you can hear the chatter and laughter of attendees having a good time nearby. It’s perfect. 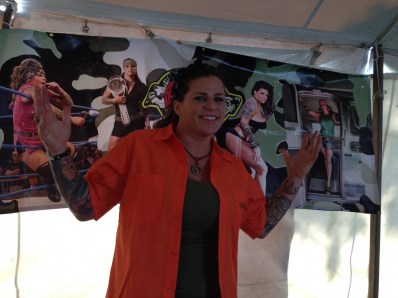 By 9:30 this morning we had already parked 25 trailers and a steady stream has continued to come in. It’s starting to look like Alumapalooza today, with rows of shiny Airstreams parked in the grass, flying flags and displaying lawn chairs and patio furniture under the awnings. By the end of the day we will have close to 100 parked, and more coming on Wednesday.

One of our special guests this year has been Jessie Kresa, a professional wrestler, who is here to show off her hot sauce. She was featured in Airstream Life in our Winter 2014    issue, and it’s great to finally meet her in person. Tonight she’ll join us on stage and give away some stuff, and then on Thursday she’s off to London England to wrestle someone to the ground. After meeting her, I suspect quite a few guys here are going to wish it was them.

I’ll be running a couple of events later today, so for the morning I’m just watching the parkers and water/electric crew do their job. This afternoon the program starts at 2:30 and runs to 8:00, and then tomorrow we go into it full-tilt starting at 7:30.