You are here: Home / Airstream / Notes from the mid-west

After writing the previous blog extolling the virtues of slower travel through the Plains states, I felt obliged to get off I-70 as soon as feasible and explore other routes through Kansas.  We dropped south to parallel routes and spent our evening in Great Bend, KS, a small town that we chose only because it was about the time of day that we wanted to stop traveling.

When you are moving around the way we are, it’s hard to be fussy about where you stay.  We are always prepared to boondock a night or two in a parking lot or driveway, and it’s actually a good way to cut down the cost of travel. Long-time blog readers know we rarely make reservations, and this is part of the reason why: we often don’t know exactly where we are going to be tomorrow. In this case the decision to stop in Great Bend was made about an hour before actually getting there.

I use an app called “Allstays Camp & RV” to look ahead for possible campsites each day. (Apps like this are basically the modern equivalent of the old Woodall’s and Trailer Life paper directories—but far more useful.) In this case we could see that Great Bend had a few small campgrounds that were all exceptionally cheap, running about $10-15 for a full hookup.  At that price you have to expect that the campground will be basically a parking lot with no amenities at all, and that’s fine with us.  For an overnight stop, we don’t need a shower house (we have our own) and certainly not a trout pond.

Thus, we have gone from Grand Bend, ON to Great Bend, KS, in a little over a week.  This reminded me of June, when I went from Perce Rock on the north Atlantic coast off Gaspé, to Morro Rock on the Pacific coast off California. This has been a summer of almost too much travel. I’ve really enjoyed it. 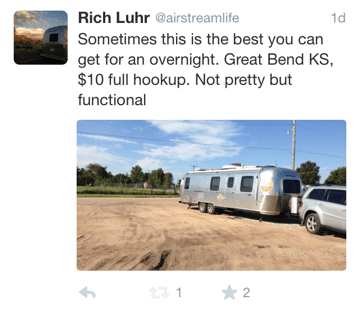 Yesterday I tweeted a photo of our unimpressive campsite on a mud & gravel parking lot. I forgot that these days there’s always someone monitoring … and so I heard back from fellow tweeter @GreatBendKS with a comment that next time we should get in touch and they’ll direct us to a nice place at a similar price.  This sort of thing has happened before, both on positive and negative comments I’ve made about campgrounds. In one case an armed ranger came to our campsite to say “Thanks for the nice review,” and in another case a campground owner threatened to sue me.  Luckily, people in Kansas are friendly. 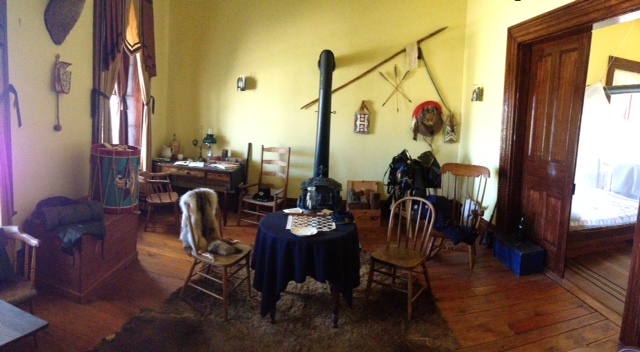 I thought our visit at Ft Larned National Historic Site would be quick but it turned into a multi-hour saga. Emma got another Junior Ranger badge (I think she’s earned over 70 of them at this point) and we had lunch. It was tortuously hot, running 103-105 degrees, which made a mockery of my earlier decision to skip I-44 down to Oklahoma in favor of “cooler weather” heading toward Colorado. But Ft Larned was interesting and well worth the stop. 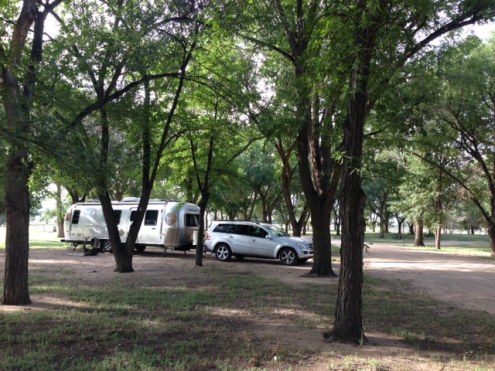 With the last few days running progressively hotter, we’ve spent every night in a state park or commercial campground just for the electric hookup to run the air conditioer. I don’t mind that because the state parks have all been great. Last night’s stop was perhaps the best of a great bunch: John Martin Reservoir State Park in the town of Hasty, CO. It has both sunny sites by the dam and shady sites beneath mature trees, and at least during this week it is mostly empty, which I love. Now that we are slowly climbing the plateau, we’re up to about 3,300 ft elevation and the nights are running cooler even if the days are still pretty hot. 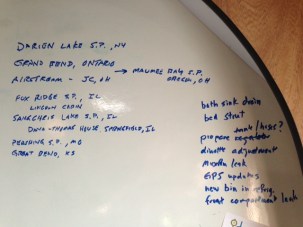 A note about maintenance:  I’m reminded once again that this sort of rapid travel across the country does come with a price.  We have logged nearly 8,000 miles so far this summer (since leaving Arizona in May), which is about average for us.  In the past two weeks we’ve done routine and minor maintenance such as greasing the Hensley hitch, adding DEF to the car (a diesel thing), and disassembling the bathroom sink plumbing to clear a clog. But when we get home we’ll need to tackle the “bug list” that has been accumulating on the white board.

The GL320 is due for some love.  The car is now at 97,000 miles and due for an oil change, transmission fluid change (we do it about every 30k miles), and a new set of tires fairly soon. I don’t mind because the GL has been pretty good to us and looks good to go for many more miles. And I still get the question almost every week we travel: “Does that little car pull that trailer OK?” Watching people gape at our 30-foot trailer and “little” SUV can be pretty entertaining, especially at the fuel pump.

The Airstream also needs a few tweaks.  The rainstorms we’ve been driving through have revealed two leaks. The MaxxFan in the front bedroom seems to have a small, wind-driven rain leak.  That’s probably just a matter of re-caulking a spot, so I can do that easily once I get a chance to get on the roof.

The bigger problem is the front storage compartment, which has always leaked but really flooded in the last storm. We’ve had it “repaired” twice and nobody has ever been able to really get it to be totally waterproof. It is also difficult to open and close when the Airstream is hitched up, because the body of an Airstream is flexible, and the flexing causes the door to jam.  I have concluded after years of hassling with it that the only solution is to replace the compartment door with the updated design, which has rounded corners instead of square. This job will be major surgery that gets a little beyond my personal comfort zone, so I may recruit the help of one of my more experienced Airstream friends this winter.

In the meantime, since we may encounter rainstorms again today, we’ll seal the compartment with packing tape, as we used to do years ago when we were full-timing.  It’s a kludgy solution but it will do until we get home.  We’re only a little over 800 miles away from wrapping up this trip.