After the motorcycle trip in Quebec I only had a week to get ready for the next trip.  I don’t expect you to sympathize with me, if you like to travel. Having to rush around and re-pack between exciting trips is the way I would be happy to spend the rest of my life.

Really, re-packing is easy and takes little time, especially since I had months of advance knowledge of the trips.  The important tasks have to do with family and work. My wife is always my partner in travel even when I’m traveling without her, but if we have been apart it’s a high priority to spend some time together.  You can only connect so much via email, phone, and the occasional video chat. It’s just as important to share a dinner, or go grocery shopping, or any other routine thing.  The same goes for my teenage daughter, who probably noticed I was gone but was too busy to worry about it.  Even if she didn’t pine my absence, the comfortable assurance that comes with sharing day-to-day life can’t be replaced any other way that I know of.

It was especially important in this case, because I was gone for nearly two weeks and now I’m embarking on another trip that will have me away for a month. After years of trying, Airstream and I finally managed to coordinate the loan of an Airstream Interstate touring coach. I’m going to take it from Los Angeles and get to know it as intimately as possible, over a period of 10 days.

I flew from Vermont to Los Angeles on June 27 and spent an uninteresting night at an airport hotel before being picked up by Victor, who is currently the finance guy at Airstream of Los Angeles.  Victor is a 19-year Airstreamer and has apparently been a fan of Airstream Life magazine for years, so we had a lot to talk about on the hour-long drive over to San Gabriel in morning traffic.  I got a quick tour of the impressive Airstream of LA facilities with Wes Nave, General Manager, and then a ten-minute walk-thru of the Interstate’s systems with one of their service guys, and they handed me the keys and wished me luck. 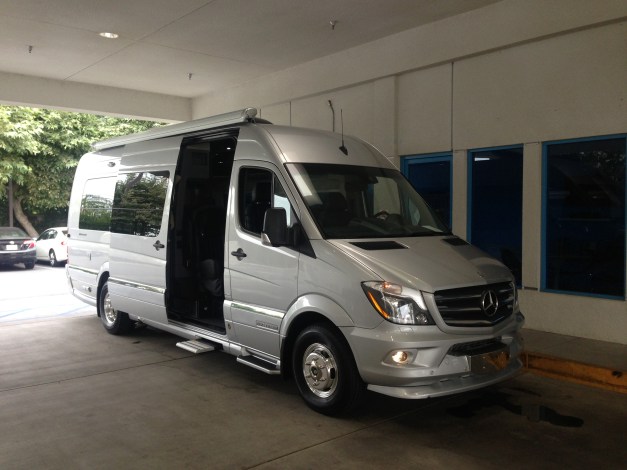 I have to admit I was a bit stunned.  This moment had been years in the making.  The Interstate was standing there, ten feet tall and 25 feet long, gleaming in metallic silver paint, with the big Mercedes logo on the front and AIRSTREAM on the sides and back.  It looked confident and expensive, and it is—$150,000 worth of German automotive engineering and American RV design layered together.  I’ve driven some expensive rigs and pride myself on being able to drive just about anything, but with the keys in my hand for 10 days—no questions asked—it took a moment before I gathered myself enough to actually climb into the driver’s seat.

I was feeling like a total newbie.  The Airstream motorhomes are really nothing like the travel trailers that I know so well.  My head was spinning with thirty or forty details that the service tech had just run through with me, and which were all rapidly departing.  Where’s that switch for the power awning, and the hidden 12 volt outlet?  What are the six or so steps for setting up the bed, again? Where is the propane fill?  At one point he had shown me where the vehicle registration was, but a few days later I realized I had no idea where it went.  (I didn’t find it until Day 10, when my friend Rob showed me the hidden dash compartment.  Good thing I didn’t get pulled over at any point.)

Even worse, somebody had kept the Owners Manuals, so I didn’t have any help from Mercedes-Benz or Airstream (at least in print) figuring out the systems.  But I didn’t actually mind this because most new owners don’t read the manuals anyway, and so my experience would be closer to that of the average person.

Because this was a “media” loaner, the PR people had outfitted the Airstream with a bunch of “camping” equipment, which was nice but made me chuckle a few times.  The flashlight, dish soap, sponge, towels, tank deodorizer, and bed linens were great.  The hammer, 300-pack of paper plates, jumper cables, and massive frying pan—not as much.  The frying pan was about twice the size of the two tiny burners on the SMEV stove, and the automotive reporters who typically take this media loaner out aren’t generally going to be cooking beans over a campfire.  You don’t really need jumper cables since (if the starter battery is dead) you can press a button on the dash to use the coach’s auxiliary battery for extra juice.  I don’t know what the hammer was for.

I was actually pleased that the Interstate came with a few basics, because I knew I would need to get stuff for the rig right away, and at least my list was shorter by about six items.  But going to the grocery store seemed like a dull way to start the trip, and soon afternoon traffic would be building up, so if I was going to get out of LA County easily, it was better to make tracks now and shop later.

Eighty-five miles of stop and go traffic from San Gabriel to Oxnard taught me a few things.  That Mercedes-Benz Sprinter 3500 EXT chassis is really sweet. Airstream ordered it with a bunch of premium options including suspension upgrades and a bunch of neat safety items (like lane-keeping assistance).  It’s really easy to drive, and the 6-cylinder diesel is super-torquey.  Most importantly, it has great brakes.  I learned that over and over as I worked down the Ventura Freeway. 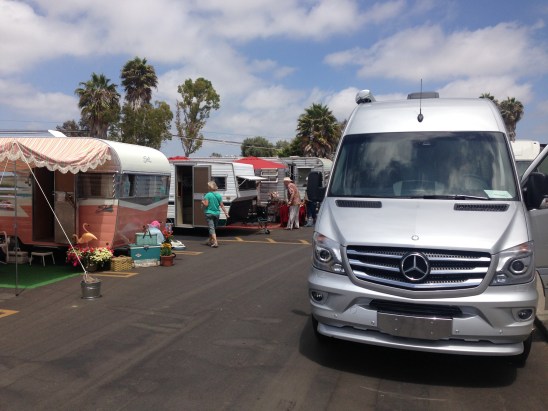 My first stop was at the Murphy Auto Museum in Oxnard.  My friend David Neel runs the place, and he had invited me to bring my ’68 Caravel to join in a special weekend vintage trailer show.  He was a bit surprised when I showed up in a 2015 Airstream Interstate motorhome, but since Airstream of LA had helped sponsor the event     we rolled the Interstate right into the middle of a bunch of 1960s Shastas, and I spent the rest of the afternoon showing it to everyone.

Well, that’s not all I did.  David gave me a tour of his museum (small, but lots of fun, open weekends only, $9 admission), and of course I checked out some very cool rigs outside in the show.  The big star was this rare GM Futureliner, and there was also a sweet 1949 Greyhound bus converted by a boat builder into an RV in the late 1950s. 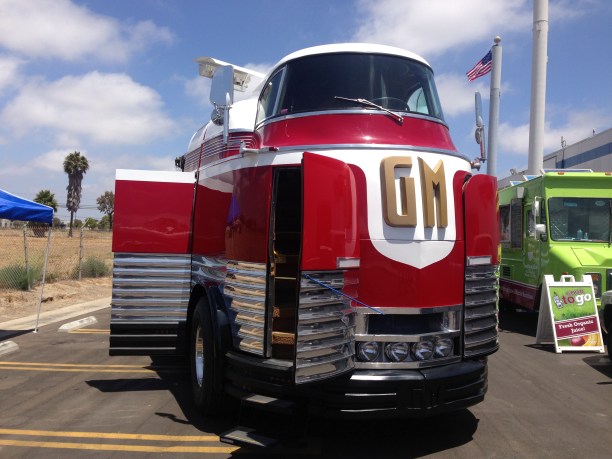 That evening, David offered me the keys to the museum’s 1984 Maserati Quattroporte III, to go do my grocery shopping.  Sheesh.  With great reluctance (ha!) I took the keys and had a very fun evening driving a Maserati to Wal-Mart, and then to meet David’s family in Oxnard for sushi.  What a rough day.  First Airstream gives me their top-of-the-line touring coach, and now I get a Maserati to run my errands in. 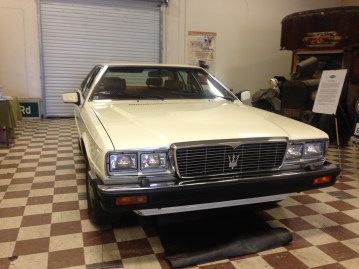 To be honest about my tribulations, David did mention that the car had $20 worth of gas in it, which in California is less than five gallons, and it is a Maserati (did I mention that already?) so it was iffy how far I’d get on that amount of fuel.  But hey, if I had to put another twenty bucks to cruise the 101 in southern California on a beautiful evening, it was going to be well worth it.

Feeling sorry for me yet?