You are here: Home / Airstream / The smarter Airstream

Last week Elon Musk (of Tesla and Space-X) released his vision for the Hyperloop, a sort of Jetsons/Futurama-style pneumatic tube system for shooting people up the California coast at incredible speeds.  I’d sooner squeeze myself into a hamster’s Habitrail than that claustrophobic nightmare, but I do admire the spirit of Musk’s proposal. Knowing he wouldn’t personally be able to execute on the concept, he released his plans to the world in the hopes that someone else would take it forward.

In keeping with that spirit, I am going to tell you about the next big idea in travel trailers.  Before I begin, I should acknowledge that this is not my original idea (neither was Musk’s; it was an advancement on an old idea).  My good Airstream friend Brian first suggested this, and then I pushed it forward in conversations with Tom (an automotive expert and Airstreamer), and then I realized two things:

But I like it, and I hope you will too.  Here’s the elevator pitch: Imagine an Airstream that is impervious to sway or loss-of-control issues, can park itself in a campsite, has huge electrical power capacity, and actually improves your fuel economy when you tow it. 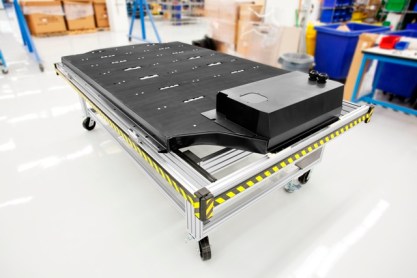 It’s possible.  The giant 85 kilowatt-hour (kWh) battery used by Tesla for its ground-breaking electric cars is the key.  It’s patented technology but it is based on readily available lithium-ion battery cells that are getting cheaper all the time.  The battery pack is heavy and flat, so it fits in the bottom of the Tesla and lowers the center of gravity.  Having a low center of gravity is a big part of the reason why the car handles extremely well and doesn’t want to roll over.

Let’s fit one under an Airstream frame (OK, some frame mods would be required for this), and also instead of the basic trailer axle, we fit in the electric motor and regenerative brakes of the Tesla too.  (See image below of a Tesla Model S electric motor, brakes, and battery platform.)

Up front, we have a very clever ball coupler that replaces the standard one.  This coupler senses the pressure of the tow ball so it can inform a microprocessor whether the trailer is being pulled by the tow vehicle, is coasting, or (going downhill) is pushing the tow vehicle. It’s kind of like a smart surge brake.  Sensors at the wheels also provide information about the direction of travel, by measuring the difference in wheel rotation. 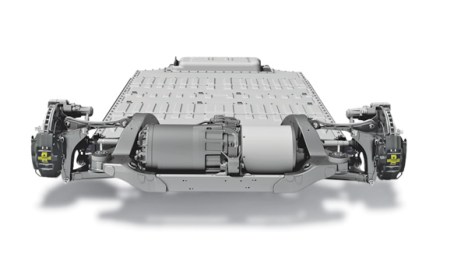 All of this 21st century cleverness means that when the Airstream is being towed in a straight line, and the tow vehicle is pulling hard, the Airstream can contribute some power.  Not enough to push itself out of control, mind you, but just enough to help compensate for the natural aerodynamic resistance of the Airstream, and thus restore some MPGs to the tow vehicle.  So perhaps your 20 MPG truck gets 20 MPG even when towing, instead of 10 MPG.  That would be nice.

When turning, backing, or coasting, the Airstream would act like an ordinary trailer, just spinning its wheels. When slowing or stopping, the regenerative brakes would put a little power back into the big battery.  Those brakes would be plenty strong and much more reliable than standard trailer electric drum brakes.

Now, a “smart trailer” like this would know if it was swaying or otherwise misbehaving, and it would be independently capable of correcting it.  Say goodbye to sway problems forever.  Likewise, it would be able to stop itself very smoothly if the coupling came loose, or the breakaway switch were activated.

When you get to camp, there’s another really nice perk.  Disconnect the trailer at a convenient spot and then use a handheld remote control to self-drive the Airstream right into your campsite, or a parking space.  This may seem science fiction, but in fact this technology is already in use in Europe with the Reich Move Control (start watching the video at 5:16 to see an Airstream doing this).  No more need to stress out over backing up the trailer into a tight spot.

Recharging is no problem at all.  If the campground has electricity, plug into the 50-amp connection and the battery should regain about 30 miles of range for every hour you are camped.  One overnight stay, and you’re charged up for another day of power-assisted towing.

Or, if you haven’t used up the battery pack during towing, it’s a huge house battery.  The standard pair of wet-cell batteries in an Airstream provide less than a kilowatt-hour of usable power.  The Tesla battery holds 85 times as much!

This system could even enable a sort of “Holy Grail” for people who really want to make RV’ing “green.”  You could potentially tow a self-powered Airstream a couple hundred miles using an electric vehicle such as the upcoming Tesla Model X.  Zero petroleum, zero emissions, and a free recharge at night while you camp.  On a typical 200-mile tow that’s a cash savings of about $60-85, more than enough to pay for a really nice campsite.

Of course, the campgrounds might get wise to this someday, and charge an electric surcharge.  I wouldn’t be surprised, but still it’s much cheaper to “fuel” an electric vehicle than any fossil-fueled vehicle.

This idea is definitely half-baked.  There are huge cost issues here, no question.  The battery pack alone would be in the $10-20k range.  Right now nobody in the RV industry is going to explore this because they know that nobody will buy it.

Also, there could be drastic regulatory issues.  Does a trailer change classifications with the Dept of Transportation once it is self-powered?  What sort of regulatory barriers might exist? I haven’t looked into any of that.

So I humbly present this idea to you, solely to spur your thinking.  Realize that the way we do things today will change.  Someday our practice of driving fume-belching trucks pulling “dumb” trailers will be as much a part of our past as steam locomotives. Somebody is going to reinvent the RV’ing industry, when the time is right, and I just hope I’m here to see it.

In fact, I want to be part of that future, so if anyone is planning to do some work with this idea, please bring me in as a consultant.  I want to be the first guy to go on an all electric camping trip, 200 miles from home with my “smart” Airstream trailer.  Don’t you?