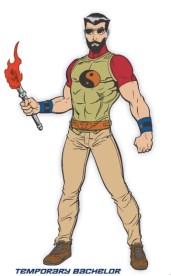 Yes, he’s back!  TBM is re-installed in Tucson and prepping for a month or two of adventure … and work.  (Mostly work, actually.  But let’s not dwell on that.)

I flew back to Tucson on Tuesday in my everyday guise of mild-mannered magazine editor, and then once back in the Man Cave (formerly known as family residence) I pulled out the full TBM suit complete with fake pecs and flaming torch.  It turned out there was not much need for a flaming torch, since this time of year southern Arizona has one up in the sky which has been frying eggs on sidewalks and melting shoe adhesive for several weeks now.

The first order of business is always to re-boot the Man Cave.  After six weeks of abandonment, there are always a few Manly Tasks to be handled, such was washing the desert dust off the cars, firing up the central cooling (it took nine hours to get the house cooled to 78 degrees), collecting mis-addressed junk mail, and sweeping up the detritus of desert life that tends to accumulate in and around the Cave. 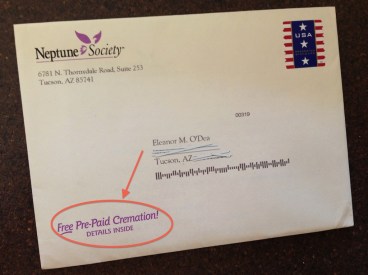 Eleanor received a particularly charming offer while we were gone (see photo).  It wasn’t clear from the letter inside whether this offer was for her personal use, or an offer she could use to dispose of someone else’s body if needed. As generous as it sounded, this letter among many others ended up in the recycle bin.

While the central A/C was fighting to expensively pump BTUs out of the Man Cave, I took the official TBM-mobile out for a quick wash and a run to the store for supplies.  Also known as the 1984 Mercedes 300D or “the Stuttgart Taxi,” the car impressed me immediately because after six weeks of sitting unattended it had absolutely no oil drips at all, the vacuum system still had full pressure (or perhaps I should say full lack of pressure), and it fired up like a new car.  All that work we did last October has paid off.

I must say that the temptation to put a trailer hitch on the TBM-mobile is very strong.  With that, I’d be able to tow the Caravel somewhere for a little trip —as long as I avoided hills.  But I’m afraid that the ancient transmission might not like the added stress of towing, and even if it did I might encounter some challenges towing a 3000-lb parachute with an old diesel that was rated for 120 horsepower when it was new.

Yesterday was an excellent start on TBM-type stuff.  I cleaned up a lot of the emails and minor tasks that had accumulated while we were in Europe, took care of some overdue errands, got my hair trimmed into TBM style, and then Rob called with an invitation to the monthly guys-only card game.  You can’t ask for a better TBM activity than a card game with the guys.  The other saps in the game (all married guys with kids) started whining about needing to go home around 10 p.m., and I just waved my flaming torch at them and told them the night was young.  Sadly, none of them seemed willing to break their shackles, and the game broke up not long after.  It’s lonely being TBM sometimes.

Southern Arizona summer heat is hated by many who live here.  I can understand that.  Like a northern winter, many activities are off the table.  I can’t go bicycling during the day, for example, and people tend to huddle inside their air conditioned houses except for the hour or so after dawn (when the temps might be “only” 80 degrees).  But we live in an area riddled with “sky islands”, meaning mountains that poke up steeply from the desert to heights of 6000-8000 feet above sea level. So hiking and exploring in the mountains is still possible less than an hour’s from Tucson.  And we live only a few hours drive from the forested Mogollon plateau of northern Arizona, seven hours drive from the relative coolness of the southern California coast, and four hours drive from the beaches of Puerto Peñasco in Sonora, MX.

That may seem a long way to go for coolness, but at least the option exists. When I lived on the east coast during bitterly cold winters, the nearest place to go to escape was Florida, 1,500 miles away. So I regard the heat as just another excuse for a good roadtrip sometime in the next few weeks.

I plan to be here through late August, with a break to attend Alumafandango in Oregon during early August.  (Still got a few spaces left, by the way, if you are thinking about joining us there!)  In the time I’ve got there are many TBM missions to complete.  I’ve got to scout some new locations for next year’s Alumafiesta in Tucson, check a possible location for a new event in the southwest for late 2014, supervise some home improvements, finish the Caravel plumbing project, work on a new book, edit the Winter 2013 issue of Airstream Life (Fall is in layout right now), check out a new sushi restaurant, see lots of family-unfriendly movies, and of course once again try to find the ultimate in Sonoran hot dogs from this year’s crop of roadside food trucks.  If you’ve got a mission to suggest, feel free to pass it along and I’ll see if it can fit into the TBM plan.