You are here: Home / Airstream / Grease is the word

I haven’t been looking forward to this most recent Airstream job.  For a couple of years the A-frame on the Airstream (the front part, for those of you who don’t have a trailer) has been looking pretty ratty.  Paint chips from rocks have turned into unsightly spots of surface rust, and the orange paint of the Hensley hitch has faded, then gradually fallen off, leaving large patches of rust.  The paint on the top of the power hitch jack has chipped off too.  It’s getting embarrassing, like the interior floor was before we replaced it last month.

The problem with the job of repainting the hitch and A-frame is that there’s a ton of prep work and it’s messy.  The Hensley is loaded with grease, which over the years has congealed with dirt and coated not only underside of the hitch itself but also the chains, coupler, and about a third of the A-frame.  After removing all the hitch parts with the assistance of Mike, we dumped them into a large tub and degreased everything with industrial-strength degreaser and heavy brushes, then washed everything.  This job took about an hour, and by the end of it much of the black grease was transferred to our bodies and clothes.

Then we scraped the loose paint off with metal scrapers, and got the surface rust off with a wire brush attached to the power drill, leaving a surface of remaining paint that resembled a cracked dry lake.  It was not pretty, but it was already an improvement over what was there.  It really needs a good sandblasting and powder coating, but I’ve decided I will do this quickie scrape and re-paint just to get another year or two, and then I’ll take the whole thing into a professional shop for a proper & smooth job.

The A-frame was less of a problem because Airstream used real paint (rather than that orange stuff that Hensley uses).  It held up very well over eight years of heavy use and many miles.  We only needed to touch up spots with the wire brush (after washing), and then wash again to remove all the dust.  It should paint up nicely. After a lot of consideration, I’ve decided to paint the entire A-frame area in flat black.  The Hensley parts will also be black, except the part that was orange which is now a metallic pewter.  Black hides the grease a little better, and it’s an easy color to match for touchups.

Those of you who own Hensleys might be wondering if I’m going to put the stickers back on.  I have an entire set of replacement stickers, including the serial # label, but I’m going to keep them on hand and install them after the hitch is professionally stripped and coated.

You might recall that I complained of our LED lights flickering when the water pump was running.  I had considered several possible causes and solutions, including using heavier gauge wire to the pump, and adding a capacitor.  I realized that all the solutions were aimed at the same symptom: voltage drops when the 12 volt electrical system was heavily loaded.  And since nobody else with the LED lights seemed to be having the problem, it seemed most likely that I should try to find the cause of the problem rather than trying to patch it. 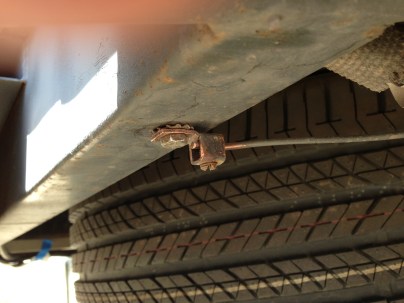 With that in mind, the most obvious place to look was the main trailer 12v ground, which is (on my trailers) is located under the main frame on the street side, just in front of the spare tire.  There’s a fat bare copper wire that runs to a little copper clamp that is in turn bolted to the frame. Since we were in that area with the wire brush, I disassembled the clamp and found quite a bit of corrosion on the copper and the steel frame.  I brushed everything back to shiny and reassembled, then tested, and voila!  no more flickering lights. I’ll coat the area with dielectric grease to reduce future corrosion.

We used to know when the main ground needed cleaning because the Actibrake disc brake actuator would suddenly stop working.  This happened a couple of times (Four Corners)  (FL panhandle) and I got used to doing roadside clean-ups of the ground wire.  The replacement Dexter brake actuator we have now doesn’t seem to be as sensitive to low voltage.  So now the LED lights are our warning signal. I think as warning signs go, flickering lights is far better than having no brakes.

The next job will be to paint everything.  This time of year we get a breeze almost every afternoon, so we’ll either paint this evening around 6 p.m. if things have calmed down, or early tomorrow morning.  Then, re-assembly, re-greasing, and adjusting of the Hensley.

In between major jobs like this I’m working on the cabinetry and other small tweaks too.  For example, yesterday I replaced four bellypan rivets with the big “buttonhead” ones because the pan was starting to come loose in the back. I also fabricated a small plumbing chase from leftover pieces of black walnut, to replace the factory one.  The list of Airstream jobs that was a page long is slowly shrinking, and two of the four “big” jobs are nearly complete, so although time is short I think we’ll be ready to go to Alumapalooza in three weeks.