Slab City is one of those places that approaches a mythical reputation by dint of repeated reports from “people who’ve been there” and told fantastic tales, like 16th century mariners who encountered sea monsters and the edge of the world.  I won’t confirm or deny anything here; I’ll just say that it’s an American cultural phenomenon and whether that’s good or bad in your mind is entirely up to you.

Certainly it’s a good thing by many of the residents, who feel they have escaped the confines of modern society and are living in “the last free place.”  Or so says the bumper sticker that now adorns the back of our Airstream.

For those who don’t know, Slab City is a collection of squatters who live on abandoned military property at the eastern side of the Salton Sea.  They’ve lived there for years, and built a ragtag community there.  It’s a hard place to describe, so if you are really interested, the best thing to do is just drop in and check it out. 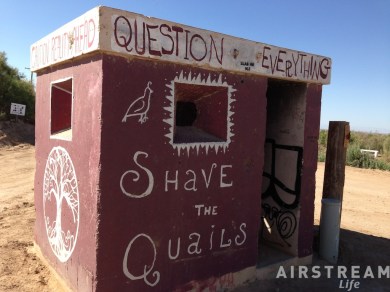 We had decided to drop by on our way north, at the suggestion of Brian and Leigh, who wanted to attend the biggest party of the year in The Slabs (which is a place that loves parties, so that’s saying something).  The seasonal residents would soon be leaving, and so it was “Prom Night,” when people would dress up and crown the Slab City Prom King & Queen.  We organized a caravan of B&L, Kyle & Mary, and ourselves, three Airstreams trundling about 65 miles from Borrego Springs, around the southern tip of the Salton Sea and then up to Niland, CA. 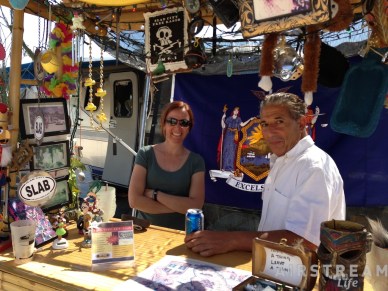 The key to our visit was a good (Airstream) friend, known in Slab City as “Radio Mike.” He has been wintering at The Slabs for several years, and operates a pirate radio station from 9 am to 9 pm daily, along with selling art, t-shirts, decals, and DVDs.  We knew Mike would set us up and give us the insider’s tour, and we were not disappointed.

Settling in was simple:  find an open spot of dirt and park on it.  No hookups of any kind.  The residents dig old fashioned “gopher holes” for sewage disposal.  For just one night, we didn’t need to make such accommodations.  All three of us parked near Mike’s trailer among the creosote bushes.  I spent the afternoon quizzing Mike about life in The Slabs and then we had dinner in our Airstream.  It was very hot, and we ran all three fans all night long.

The “Prom Night” was very interesting.  It was held at one of The Slabs few gathering places, a conglomeration of stage, castaway couches, and trailers known as The Range.  This open air bar/stage/dance hall made a strangely compelling scene, once it was filled with lights and Slab residents in their finery and duds. To the side, photographers were capturing prom night photos, although most of the people posing were decades past their high school years.  We stayed long enough to see the Prom King and Queen get crowned, and then walked back along the dusty Low Road in the darkness, back to our Airstreams. 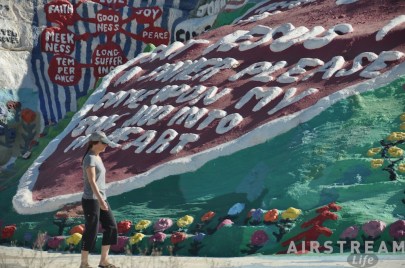 It was a memorable place to be for Easter.  Mike, Brian and Leigh went over to the community hot spring for a soak (clothing optional, but they were modest) while we stayed back in the Airstream.  The bunny found us again (it’s amazing how he keeps doing that), and so breakfast was mostly chocolate.

Our last stop was Salvation Mountain, to get a look at that astonishing, crumbling, painted spectacle.  The man who created it is gone, and already the monument, which is a thin veneer of paint over dirt and straw bales, is starting to fail.  It may not be long before it is gone too, so I really wanted to document it before we left.  The “mountain” looks like a cartoon confection, covered in colorful frosting and religious platitudes writing in white icing.

Our stay could be only one night.  By Monday I had to be in Las Vegas for work, and Kyle had to be somewhere he could get online reliably.  We said goodbye to Mike, Brian, and Leigh, and set off for points north.  Our caravan was back to two trailers:  ours and Kyle & Mary’s for the next 300 miles.