You are here: Home / Airstream / Maintenance / Remind me why …

It’s easy for me to forget that I have an unusual view of the Airstream world.  Most Airstream owners enjoy the simplicity of being happy travelers, and that seems blissful to me. I remember the first year we had an Airstream, before I started the magazine, and it was really a lot of fun.  We just thought about where we were going next, and not much else.

These days I look at the world of Airstream through a sort of cubist perspective, sometimes seeing both sides of an issue at once, often balancing the needs of the magazine with the desires of its supporters, living on both sides of the perennial “vintage versus new” debate, as a both a customer and a promoter of the lifestyle, and as an occasional consultant to the industry.  It gets confusing. 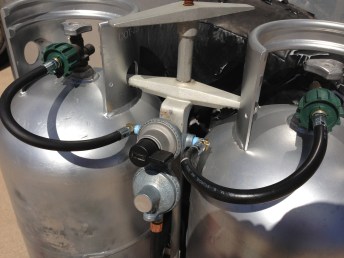 The Caravel plumbing project has been halted this week pending the arrival of parts and tools.  I should have everything I need to complete it, on Monday.  In the meantime, I got the propane regulator installed.

It’s a fairly easy job, but it did require special-ordering a longer main propane hose, four new (smaller) stainless screws, and two right-angle brass fittings so that the lines wouldn’t bump into the tanks.  That’s all because the new regulator wasn’t an exact replacement.  The screw holes are smaller, and the physical shape of the regulator is different.  When I tried to connect the 30# propane tanks the first time, the pigtails bumped into the tanks.  The right-angle fittings fixed that, but getting the original brass fittings out of the regulator was a hassle.  Eventually they came out with the help of a vise and an extension bar on the wrench.

The other problem with this replacement was that the red/green “flag” that indicates whether the tanks are full can only be seen from the front of the regulator.  All the other ones I’ve owned had the flag on the top so it could be seen from any direction.  So that meant the new regulator had to be mounted to face forward.  This required a 23″ hose instead of the 18″ one I had already bought.

The whole job took three visits to the hardware store, and now I’ve got a bunch of screws, bits of brass, and a hose that I don’t need.  These are the kinds of surprises you have to expect when fixing a vintage trailer. My spare parts box is getting full.

Meanwhile, the Safari re-flooring project is just about ready to start this week.  I have recruited Mike to help out with the two-person jobs, like getting the bed frame and dinette out of the trailer.  We are hoping to start Monday or Tuesday on this one, day jobs permitting.  I’ve been scouting out tool rentals and planning our attack of the job.  First task is to remove the bed, bedroom carpet, and dinette.

For those of you who were following the Mercedes 300D project, it’s pretty much done.  Since my last mention of it, I’ve been just tweaking and adjusting.  I replaced the rear differential oil (really stinky stuff thanks to the high sulphur content), fixed some loose wood on the dash, had four new Michelin tires installed, fiddled with the monovalve to try to resolve an intermittent heat issue, lubricated a few things, bought new floor mats, and had the car professionally detailed.

None of that took much effort on my part, so I’ve just been enjoying driving it around town and on a few short trips.  I exhibited it in a car show a few weeks ago, and took a roadtrip up to Phoenix (120 miles each way).  It’s now exactly what I wanted it to be: reliable, 100% functional, and reasonably good-looking.  This summer I’ll probably have to get the windows tinted, but other than that it shouldn’t need anything but oil changes.   And no, I’m not going to put a tow hitch on it.

With all these Airstream projects past, present, and future, it seems only fair that we should take advantage of the reason we own Airstreams.  So we  have determined that we are going to California in a few weeks.  Everybody wants a trip, and I’ve got a few business things to do in SoCal.  It will be nice to get away from home, re-gain some perspective, and relax in the Airstream for a while.  At this point we don’t know how long we’ll be gone, but hopefully it will be at least two weeks and possibly more.  It will take that long to soak up the feeling of being on the road again and remember why we do all this stuff.