This has been an interesting week, and I mean that with every definition implied by the word interesting.

There is an Airstream rally that has been going on for decades in Sarasota, FL called the “Florida State Rally.”  It is in some ways a piece of what the locals call “old Florida,” with sandy roots that reach down to the historical pinnacle of Airstreaming in 1960s.  The rally, run by the Wally Byam Caravan Club International (WBCCI), has been a long-standing tradition for many Airstreamers.  They migrate annually from points north, to park together for five or six days at the Sarasota County Fairgrounds and share the social niceties that have defined the club. 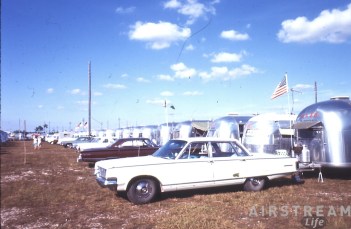 We started going to the FSR in 2004, with our then-four year-old child and our recently acquired 36-year-old Airstream trailer.  Back then it was a remarkable event with over 700 trailers in attendance, making it the second largest Airstream rally of the year.  We pulled in and marveled at the rows and rows of Airstreams, and found that nearly every one of them held inside a pair of grandparents who were generally delighted to see little Emma and give her some toy.  We were younger than the average attendee by a solid 30 years but we still felt very at home. 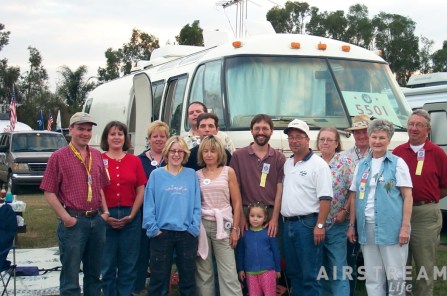 We also met some good friends at that first rally, several of whom are still close friends today.  (Have I mentioned before that we owe a lot to Airstreaming?)  We loved the vintage Airstream community, and the good times spent with friends around the campfire.  So we went again, and again, and I went by myself once too.  It was always a nice time.  I love visiting Sarasota in February.

But in recent years, attendance at FSR declined dramatically, hitting a low of about 316 trailers last year. There were many reasons for this, including a stagnant event program and the changing interests of Airstreamers, but the final blow was simply a matter of age.  I’ll quote Vic Smith (the Director of the rally for the past two years):

“The population we draw our volunteers from averages around 78 years old … Even with all the advertising and out of the box changes we made, we only increased participation by 17 Airstreams … With the rapid loss of the volunteer population and the unwillingness of QUALIFIED leadership to step up to the challenge, it was felt that if there was to be an Airstream based rally in February, in Florida next year and in the years following, it was going to have done by someone else. As much as it pained all of us, the only solution was the obvious one.”

So they called Brett and me and asked us if we’d do something to fill the gap.

This was a thrilling opportunity, but also a terrifying one.  Imagine being asked to replace something with a fifty-year history, with all the expectations that implies.  Imagine facing the economic and operational challenges of hosting 300+ Airstreams.  The FSR had over 60 separate organizational committees.  We have a staff of two, plus a handful of volunteers.  Even though we’ve done Alumapalooza with 200 trailers, this is a whole new level of complexity and expectation.

Plus, the final vote by the FSR Board of Governors happened on Wednesday.  They told the members on Thursday.  We were asked to make a presentation about our new event by Saturday.  Talk about pressure.  We didn’t even know if we could even pull off the event, much less announce pricing, dates, and any hints about what the event might include.  Brett was on-site in Florida trying to rapidly gather information and I was in Tucson trying to build a quickie spreadsheet and website, and we were both flat-out trying to make it all come together in 72 hours.

We’ve managed to get fairly far since then, by working day and night and flinging text messages & emails at each other.  Here’s what we know today:

The rest of the details … I don’t know.  But as of today, a mere three days after being told that we were stepping in, 29 Airstreams have signed up and paid to come to our future Alumaflamingo.  Some large caravans have committed to coming, too.  It’s a real vote of confidence that all those people have plunked down for our event, even though we can’t tell them much about it yet.  The Internet buzz has been good, too.

So it’s time to rise to the challenge.  “In for a penny, in for a pound,” as the saying goes, and it feels like we are in for a metric ton.  We will spend the next twelve months working on this event, knowing the entire time that the show that we produce in 2014 is standing in a 50-year-tall shadow.  It’s not about replacing the Florida State Rally, because that can’t be replaced.  It’s about picking up the torch and carrying it forward to something all new, and worthy of another 50 years.  Sounds like fun!