You are here: Home / Airstream / Almost ready for guests

We are in Denver and things are hectic, as the final preparations for Alumafandango are completed.  I knew that we were walking into a minefield of last-minute problems and there was going to be little I could do to affect things, but even with that foreknowledge it was still a shock to see what lay ahead.

My last inspection of the site was in May, and at that point not much had been done to improve the site where we were scheduled to camp for five days.  There were grandiose plans to bring in big loaders, dumpsters, and heaps of fill, along with water lines, electric lines, and a dump station.  In June, not much happened, and that actually turned out to be a good thing, because in mid-July the big thunderstorm came through and wiped out the area.  If a lot of earth-moving had been done it probably would have washed out to the lake.

And so, in late July when you’d think we would be all set, the real task of building a campground at Lakeside began.  It has been ongoing ever since, starting with clearing of old vehicles and dead trees, and hauling of debris and saturated soil.  At least 32 twenty-cubic-yard dumpsters were filled with junk. Screening was set up to hide what couldn’t be moved.  Four abandoned mobile homes were hauled off, the living trees were pruned, fresh concrete was poured for new lamp posts, and electrical wires were buried.

But that was only the beginning.  When I showed up yesterday to see the progress, there were two huge Caterpillar scrapers running around, moving fill from the nearby Wal-Mart construction site to our site.  Each load of those machines moved up to 31 cubic yards of dirt, and they were in constant motion.  Over the weekend they will have moved enough dirt to raise the level of the campground and surrounding area by eighteen inches.   A road grader chased them around, leveling and compacting the soil.  It was amazing to watch the place transform from junkyard to the beginnings of a rally field. 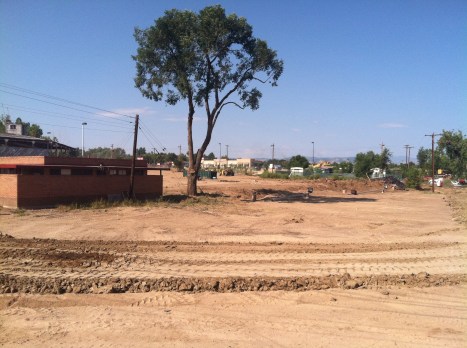 Unfortunately, things are behind schedule, and many problems have cropped up.  Yesterday the weight of the machines (about 55 tons when loaded) revealed a soft spot in the ground.  A few hours later the cause became clear when a fresh water spring popped up in the ground.  There’s a broken water line somewhere, and tomorrow a backhoe will be on the site to dig it up.  Being so late, we won’t have time to put a final covering on the campsites, so the plan is to bring in chopped hay instead.

The Wal-Mart construction next door has been a boon because we got hundreds of yards of free fill (and their excavation company to spread it), but the downside is that the construction gate we were going to use for access is not going to be available, so we had to come up with a new access plan and make up some signs to redirect traffic.  The Merry-Go-Round suffered structural damage as a result of the big July thunderstorm, and that means we’ve had to cancel our QR Code Hunt because all week a contractor will be in the park to build it a new support structure.  And I can list off half a dozen more things like that …

So this has been a test of our ability to be flexible.  As late as Sunday afternoon I was revising the official program once again to accommodate last-minute changes.  The amazing thing (to me) is that despite everything that has happened, we are still going to have a great week.  Except for noticing the packed-dirt campground, the attendees won’t be aware of everything we’ve gone through to hold this event. I am making a little movie of the weekend’s construction so that they can see what the place looked like just three days before they arrived.

Although the site looks rough now (better today than when the photo above was taken), Brett and I have learned that you can make almost any place look good once you decorate it up with a bunch of cool trailers.  Our site for Modernism Week 2012 was an ugly dirt parking lot surrounded by the concrete blocks of a dead mall.  The sidewalks were broken and there were the remains of shattered bottles in the dirt.  We brought in 22 trailers and about ten vendors and suddenly the place was festive with color and decorations. Over 1,200 people paid admission to walk around there.  That’s the power of aluminum. 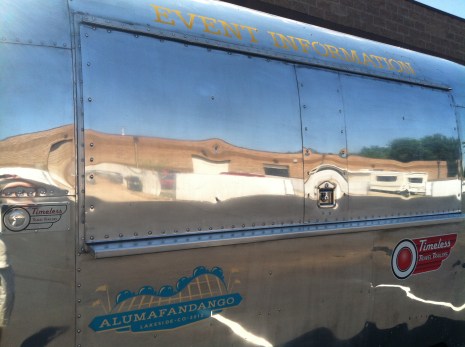 Speaking of which, our official event trailer is ready to go.  We checked it out yesterday at Timeless Travel Trailers.  It’s a 1962 Globe Trotter converted to a coffee shop, and subsequently converted to be our registration booth.  It’s just one of about eight trailers that the guys at Timeless will be bringing over to show and use during the event.

I was on the site today and I’ll be there again tonight with Brett to check on things and see what we can do to help. We’ll be loading in the show trailers this evening, and tomorrow the electrical boxes should be in place, and the final cleanup and grading can be completed.  The Airstream Life trailer will go in early Tuesday morning.  We are still far from being able to relax but at this point I think we’ll be ready—just barely—for our guests to arrive on Tuesday.