You are here: Home / Roadtrips / Motorcycling / The Black Flies climb a mountain

Our Adirondack motorcycle tour entered its final day when we awoke at the borrowed camp at Loon Lake.  Our plan for the day was really no plan at all, just a vague sense that we’d wander around the northeast and eventually end up back at Essex NY to take the ferry back to Vermont.  Naturally Steve and I were eager to find some more backcountry dirt roads where nobody else would be found, and Colin’s low-slung Harley and vulnerable crankcase would have to tough it out.  Our first shot was an old railroad grade that was great fun but after a couple of miles of slewing around on loose gravel, we took pity on the old hog and turned back.

Not, however, before I captured

this shot with my helmet-mounted video camera.  Colin commented that it was the toughest road so far for his bike, perfectly graded but the loose gravel atop hardpack made it “like driving on marbles.”

It wasn’t long before we found another dirt road, the Thatcherville Road that becomes Buck Pond Campsite Road.  This one was more comfortable for the Harley and a few miles down we stopped at an idyllic overview of the horribly misnamed “Mud Pond.”  It looked crystal clear and absolutely unspoiled from where we were standing.

One great aspect of the Adirondacks is the numerous lakes and navigable rivers.  You can’t go 10 miles without bumping into another beautiful and uncrowded northern lake.  Along this road we discovered into the little-known Lake Kushaqua and several ponds, each one a paradise for canoes and kayaks.  Eventually we came out at Rt 3, stopped in Bloomingdale NY for breakfast at a diner, and then decided to take the scenic drive up to the summit of Whiteface Mountain.

The road to the summit of Whiteface Mtn serves no purpose other than as a monument.   It was built during the Depression as a public works project to honor military dead.  The road to the top costs $10 and is a fantastic drive, with spectacular views at the top if the day is clear, as it was for us.  I shot video all the way up and all the way down, which is included in the YouTube video here.  It was well worth the ten bucks, especially for the opportunity to do it on a motorcycle. 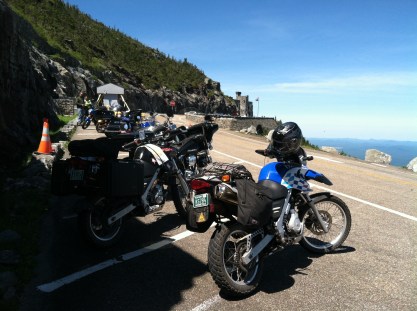 Of course, going up meant Colin’s cell phone would start ringing again, but it was a small price to pay for the 360-degree views with eighty mile visibility.  We were hovering over Lake Placid just west of us, and off to the east Lake Champlain was easily spotted.

At this point in the ride we had long since gotten over the need to ride as a pack, so I went down the mountain first, and we re-grouped at a gas station down below in Wilmington.  We still had no real plan, but Steve led the way from there, through the town of Jay and down Rt 9N.  There we found one last glorious winding paved road that had us all grinning:  Hurricane Road.  I hadn’t expected it, but it was definitely the best set of twisties we hit on the entire three days.  From there, it was anticlimactic  wandering through fields all the way back to Essex. 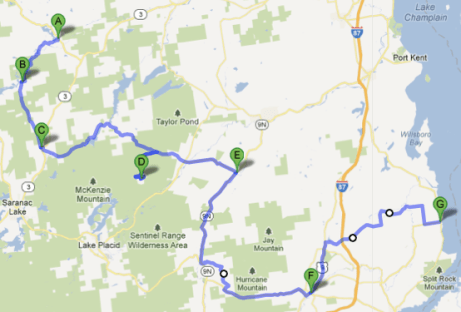 We parted company with Colin there and hopped the ferry back to Vermont, reflecting on the success of the trip. We had no breakdowns (although plenty of Ural-tweaks).  We had no arguments, or even tense moments.  No crashes (Steve later said he had expected I’d wipe out at some point.)

We didn’t get lost, although we tried.  The weather was uniformly spectacular, and it seemed like every road had something to offer.  Even the worst road food we ate wasn’t really that bad.  We had covered 450 miles in three days with two German bikes, one American hog, and a Russian artifact and had a great time doing it.  It seemed a shame to be going home so soon.  Now I was feeling some regret that I had rejected our longer trip plan: a ride around Quebec’s Gaspe Peninsula.

Still, I won’t be buying my own motorcycle anytime soon.  It’s not the same down in southern Arizona.  This tour was special because it was in the northeast, where the rural roads seem endless.  I have a feeling we’ll be doing it again sometime, the next time I’m in town.  This may be something that, for me, can only happen up in the northeast.  So my jacket and helmet will stay up there, waiting for the next chance to hit the road.

This wrapped up my visit to Vermont.  Work and other obligations were calling, so on Sunday Eleanor hauled me to the airport and I flew back to Tucson.  (You’ll notice that I’m flying the Temporary Bachelor Man flag again.)  I will be here, in the heat, getting some intense work done, for the next two weeks.  Then I’ll return to Vermont to gather up the family and the Airstream and begin the long journey back west.  If you’re only interested in Airstream adventures then tune in after July 4 (and incidentally, why did you read this far?)  If you are curious what TBM is up to in Tucson, I suspect there will be further updates coming soon…