You are here: Home / Roadtrips / Motorcycling / The Black Flies ride

For quite a while I’ve been anticipating an unusual event as part of this year’s Airstream trip to the northeast.  My brother spent the winter acquiring and refurbishing a pair of BMW motorcycles, which we planned to take on a tour.  I just got back from that trip a few days ago, and finally have a chance to write it up.  I’ll post blogs about the trip over the next three days, starting with today.

Motorcycling was never something I had planned to return to.  My last bike was a Yamaha 550, sold in 1989 after I realized that it just wasn’t fitting into my life anymore.  It was fun, but I never looked back, until Steve started sending me links to stories of “adventure” riders who have ridden their BMW motorcycles on long and treacherous roads in remote parts of the world.  At this point in my life, a motorcycle still didn’t fit and I had even more reasons not to get back into it, but eventually I softened on the issue and began buying the necessary gear.

I’ve already described my first ride in the previous blog entry.  We had planned to take a three-day tour through New York’s Adirondack region starting Tuesday (see map below), but the weather got iffy and none of us were eager to ride in the rain.  So on Tuesday we used the clear morning hours to take a local tour through Vermont, up to Rt 100 and back, which (with various zig-zags on dirt roads past numerous farms) gave me another 80 miles of touring practice before the rain arrived. 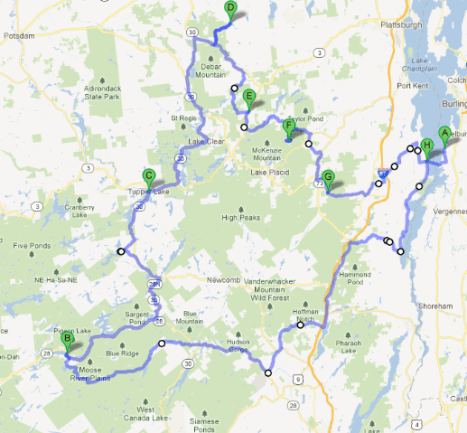 This also gave us time to prepare. Eric’s Ural needed a little more tweaking of the drum brakes, which are weak at the best of times, and Emma was still at work painting up some black Airstream Life t-shirts for our gang.  We named ourselves “The Black Flies”:  Steve, Rich, Eric, and Colin.  Each of us adopted a gang name.  Mine was “Wally”, Steve was “Pusher,” Eric with his Russian-made Ural & sidecar was “Putin,” and Colin was “Axel” (deliberately misspelled).  We pledged to wear the shirts all three days no matter how stinky they got, and almost managed it. 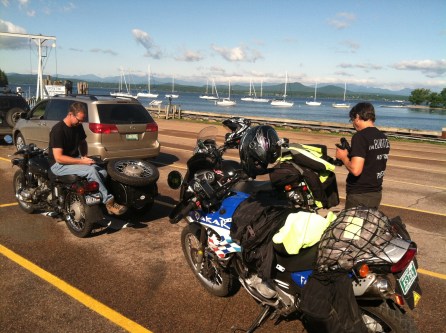 On Wednesday the weather was clear again.  Steve, Eric, and I rolled out of the driveway and a few miles to the Charlotte-Essex ferry that crosses Lake Champlain.  In the hamlet of Essex NY, we met up with Colin and his thunderous 1980s-era Harley FLHT “shovelhead.”  It looked like a black limousine with four inches of ground clearance, a typical Harley of the era, with plenty of added chrome, huge saddlebags, and a “King Of The Highway” emblem. 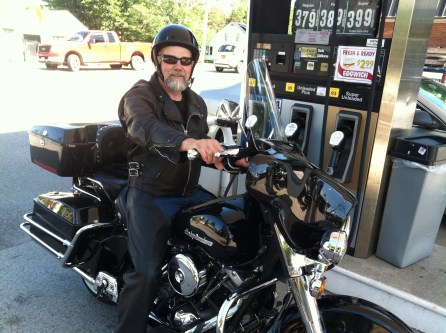 As Colin noted, the Harley was basically the equivalent of two BMWs, since it had twice the number of cylinder (two to our one), twice the engine displacement (1350 cc versus our 650 cc engines) and weighed nearly twice as much.  These characteristics proved to be highly relevant later, especially the fuel economy.  The BMWs got a steady 69 MPG, while the Harley and the Ural were running more like 29 MPG, with the same size fuel tank.  As a result, we stopped for fuel a lot but Steve and I only filled up every other stop.

From the very beginning the ride was spectacular.  After all the practice the bike was beginning to feel like a part of my body, which is exactly what you want, and the sun was shining, and the roads were sensuously curvy.  We browsed through the towns of Essex, Port Henry, Mineville, and Schroon, taking every off-beat twisty road we could find.  I leaned into the corners with a feeling of absolute freedom, remembering why motorcyclists love to ride.

It wasn’t long, however, before Steve’s route plan began to challenge Colin’s Harley.  That thing was built for straight-line highway cruising, and Colin wasn’t sure at first how much he wanted to lean it.  He came up to speed fast, especially when we went off-road a little to explore a defunct amusement park in the woods. 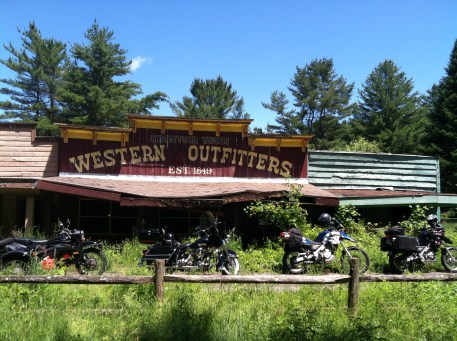 A few hours later, we hit the first long dirt road of the trip, and had to pause for a conference before proceeding.  Could Colin’s bike make it?  The road was 30 miles long of single-lane former logging road that was only marginally improved.  Every inch of it was either a pothole or a FBR (Big Rock) embedded in the road, and with the road dappled by sun filtering through the trees overhead it was difficult to see what was coming.  If you took your eyes off the road for a split-second, it was virtually guaranteed that another FBR would arise directly in front of you.

Colin and the Harley’s low-slung crankcase miraculously survived this treatment, with good humor to boot.  Riding the BMWs, Steve and I were in paradise. This road was like a game for our deeply-suspended bikes, and I soon found myself dodging and weaving around the obstacles at 30 MPH with pleasure.  This sort of road (or worse) is exactly what these bikes were made for.  The 30 miles disappeared far too quickly for me.

We eventually found ourselves in the village of Old Forge, and from there rode a relatively boring stretch of highway all the way to the Adirondack Inn at Long Lake, where we stopped for dinner.  After dinner the air had dropped into the 50s and it took every stitch of warm layers I had to survive the 15 mile ride at dusk to our cabin at Blue Mountain Lake.  The other problem with riding at dusk is that the bugs and animals come out, so by the end I was tired of watching for deer and my visor was coated with smashed insects.  We had been out for 11 hours.

The cabin was borrowed for the night.  We were under orders to return it in immaculate condition, and that was a bit of pressure for four guys but we managed.  The hot water was off, which prevented the glorious pre-bedtime shower I would have liked, but Eric got the hot water going for the morning.  We divvied up the beds, wiped the bugs off the visors, split a half-gallon of ice cream, and crashed by 11 p.m.  It had been an awesome day, and we were all looking forward to more…