You are here: Home / Airstream / A night to forget

The weather was fine in Destin, Florida, but the campground was booked for the weekend along with all of the other state parks in the area.  We’d had a good week camped by the beach and it would have been nice to stay longer, but it seemed to be time to continue on our trek.  So we harnessed the Mercedes and pulled out for points west, picking up Rt 98 along the scenic panhandle coastline, and then I-10.

We had made a strategic choice to zip through the Gulf Coast states in favor of spending more time in Texas, so uncharacteristically we plowed through the day and into the early evening, stopping occasionally but mostly concentrating on putting miles of concrete behind us.  We flew through the tiny piece of Alabama near Mobile, raced past the casinos and recovering neighborhoods in Mississippi, and floated above the swamps of Louisiana’s Atchafalaya basin.  By 7 pm we’d landed in Sulphur, LA (just west of Lake Charles) and parked for the night at a convenient Cracker Barrel restaurant, 450 miles west of where we began.

This is often an M.O. for us as we are in a hurry: drive all day and crash out in a safe parking lot somewhere.  Wal-Marts are popular for this, but so are many other 24-hour stores, truck stops, and RV-friendly businesses.  Sometime you get a good night’s sleep, and sometimes it goes like this:

2 am: sounds of freight train horns, long and loud.  Sudden and unhappy realization that there is a major freight crossing just behind the hedge.

5:34 am:  another realization, this time that the sirens are right next to you.

… and that’s when Eleanor and I popped up out of bed.  We looked out the windows. Fire trucks.  “Is something on fire?” said Eleanor. [Pause]  “Oh. The Cracker Barrel is on fire.” 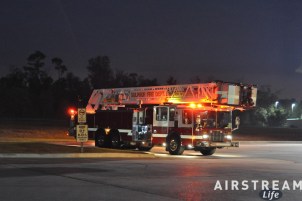 And indeed, a plume of greasy smoke was visible in the pre-dawn darkness (lit by sodium lamps of the parking lot) rising from the kitchen of the restaurant, perhaps 30 feet from us.  On the other side of our Airstream, a fire truck was setting up shop.  Needless to say, this is not what you want to see when you wake up.

Talk about a “fire drill.”  I was out of the trailer in seconds, saying, “Get ready, we’re moving,” while Eleanor hurriedly stowed loose objects inside the trailer and woke up Emma.  When we are in overnight parking mode, the trailer is connected to the car and ready to move on a moment’s notice.   Normally I just drop the tongue jack to stabilize the trailer a little.  For some reason, this time I put the stabilizer jacks down, so the firemen were treated to the sight of me very rapidly winding up the stabilizer jacks with my DeWalt drill while wearing pajamas.

But practice pays off:  both Eleanor and I were ready to roll inside of two minutes.  I popped my head in the door and told Eleanor to stay in the Airstream with sleepyhead Emma while I moved the rig to an adjacent parking lot.  One minute after that, we were out of the way, parked at the gas station next door. 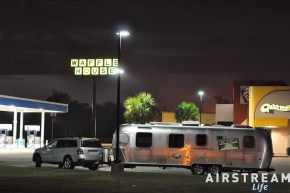 My concern was not that we’d catch on fire; the fire was clearly very small and probably already under control by the time the Fire Dept arrived.  We wanted to be out of the way of the firefighters, and we also didn’t want to attract the attention of any local law enforcement in case it turned out that overnight parking was prohibited in this town.  Neither turned out to be a concern, so we watched the show from a safe distance, and took the opportunity to load up 14 gallons of diesel fuel and a cup of coffee.

(By the way, shutterbugs: my primary 50mm Nikkor f/1.8 turned out to be the ideal lens for this situation, although for hand-held shots I did crank the D90 up to ISO 3200.)

At this point we realized that none of us were going to get back to sleep, so we all got dressed, hopped into the car, and got back on I-10.  Why waste a good early start?  Frankly, we should have fires more often.  I don’t believe we’ve ever managed to get on the road by 6:15 am before.

So sometimes free parking works out well, and sometimes it doesn’t.  But hey, it could have happened anywhere.  One of our favorite spots in Tucson (before we bought the house) just had a fire this week, and it took out three rigs. Life isn’t safe, but hopefully it is at least interesting.