The fun is in the hunt.  I don’t know if it’s cave man instinct, or the human ability to problem-solve, but there’s something very satisfying about analyzing your prey, pursuing it, and capturing it.  Has there ever been a hunter who hasn’t been grinning (at least on the inside) while dragging home their latest acquisition?  It doesn’t matter if it’s a deer, an antique Chesterfield, a car, or (in Eleanor’s case) a fine salmon from the fish market.  You feel a sense of pride in having bagged the right one, especially after a long and grueling search.

That’s where I find myself right now.  For the past several months, I have been hunting a fairly common quarry: the Mercedes 300D, built between 1976 and 1985.  Being based on the famous Mercedes W123 chassis, they’re everywhere — literally millions sold worldwide — so, like wild turkeys, it’s not rare to spot one, but it is rare to spot and bag the “right” one. 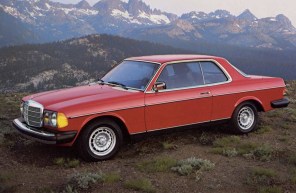 I’ve been looking for one for complicated reasons that probably deserve an entirely separate blog entry.  Suffice to say, I’m intrigued by something about those old diesels.  One car reviewer described them as “the automotive cockroaches: they’ll eat the grease out of your dirty frying pan, and you can’t hardly kill them.”  Like the 2009 GL320 we use to tow our Airstream, the 300D is a 3.0 liter turbodiesel, but the resemblance ends there.  The Mercedes 300D is a solidly-built touring car, beautifully engineered, but the 5-cylinder engine used in it is a loincloth-wearing primitive compared to the ultra-complex electronic GL320 spaceship.

The GL320 has a bunch of computers in it to run everything from climate control to trailer lights.  The 300D uses vacuum hoses from the engine to control nearly everything, including the door locks and transmission shifts.  It’s like comparing email to a pneumatic tube.

The GL320 is barely audible at idle, while the 300D exposes its diesel truck heritage proudly and loudly. This is one of the things that I like about it.  The GL320 doesn’t sound like we all expect a diesel to sound, thanks to super-high-pressure computerized fuel injection.  When I’m in a campground and trying to make a quiet getaway at 7 a.m., I appreciate that, but I have to admit there has always been some disappointment that the GL320 doesn’t sound just a tiny bit more musical as it runs.

Three decades lie between the technologies of these two vehicles, and yet the 300D is still a remarkable car to drive, a real pleasure as it serenely — and reliably — floats down the road.  It’s not fast (zero to 60 in 14 seconds), it’s not powerful (125 hp, 170 ft-lbs torque), and it’s not sporty.  But it’s a marvel of its time, and a car I could only dream of when it was new and priced at well into the $30k range.

The 300D and many variants (such as the very common 240D) were all built on a common chassis, called “W123”.   In this video, Mercedes says 6.7 million of them were made worldwide, although the official Daimler press release says 2.7 million.  Regardless, the combination of incredible durability, economy (in fuel), quality, and relatively low resale cost has made them very popular, and many people collect them.  When fuel prices go up, so do the values of W123 diesels, because they convert fairly easily to run on Waste Vegetable Oil (WVO) or Straight Vegetable Oil (SVO).  (Interestingly, the resale value of WVO or SVO converted Mercedes cars is pretty poor, at least from my experience.  Perhaps this is because aficionados believe that running veggie oil shortens the life of the engine, and the conversion, with necessary gauges and switches, decreases the originality of the car.)

In Europe, the W123’s were often taxicabs. Rather famously, a Greek cabbie set a world record for durability, logging 2.8 million miles in a 1976 Mercedes 240D (with eleven engine swaps).  It’s a great story, but it was on a W115 chassis, not a W123.  Not being highly concerned with accuracy, eBay sellers love to tell a mutated version of the story in which the record-holder is a W123.  This is probably why you can see auction after auction on eBay claiming that “these cars often run a million miles or more!!!” — which is hogwash.   Most of the W123’s in North America died from owner neglect, accidents, or rust.  If you treated yours well, kept it garaged, didn’t drive it in winter, and adhered strictly to the maintenance cycle (with valve adjustments every 5,000 miles, etc.), it would last. 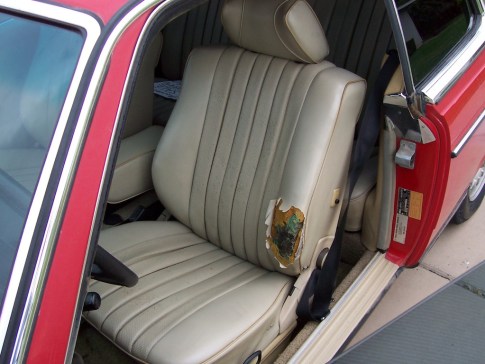 Most people didn’t take such care, and so those cars are gone.  Or worse, they’re for sale right now.  I can’t tell you how many really crummy examples of sadly abused W123’s I’ve seen in the past few months.  Craigslist is a rich source of horrific 240D’s and 300D’s in brutalized condition, with delusional sellers who think they are Teutonic gold mines. Well, they are holes in the ground, but not the right kind of holes I’m afraid. 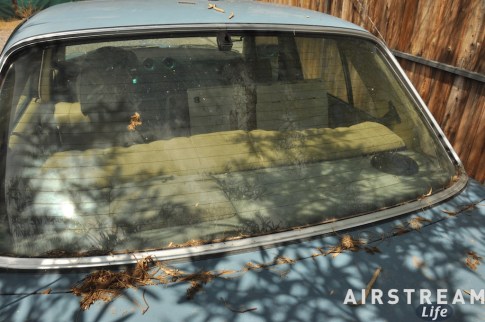 The eBay sellers are particularly dangerous.  Pictures taken from 20 feet away reveal very little about the condition of something as complex as a car.  The seemingly beautiful car in the photos can become a rusted nightmare when you take delivery.  “Car flippers” who don’t know or don’t care to share the history of the vehicle will take your money and smile.

So in the pursuit of the right 300D, I enlisted the help of friends when I could.  Dr. C was instrumental in teaching me the fine points of classic Mercedes — and especially how to recognize the warning signs of troublesome cars.  Thanks to him, I can glance at a 300D from 50 feet away and tell you what problems to expect on the inside.

Other friends took the time to visit the cars that were far away, on my behalf.  The red 300D pictured above was investigated and photographed by my friend Todd H up in the Phoenix area.  The dark blue 300CD (door pictured above) was investigated and photographed by my friend Andy G in the Boston area.  In both cases, their on-site inspections revealed several serious defects that the sellers failed to photograph or acknowledge in their ads.  I can’t believe people buy cars from thousands of miles away, just on the basis of a few eBay photos and some breezy seller promises (“everything on this car is primo!”), but they do every day. 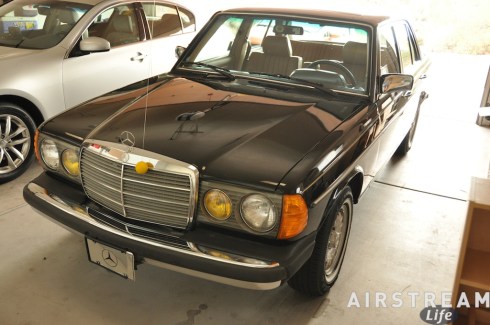 The hunt finally ended last Friday, and amazingly the car was found just five miles from my house.   A tip from a local Benz independent mechanic led me to a lovely couple in their eighties who were preparing to downsize to a smaller house across the country.

They had a beautiful, one-owner 1984 Mercedes Benz 300D that had been garaged for 22 years and driven regularly.  They’d maintained it as if they were going to keep it forever (which they very nearly did!)  Best of all, they were very fair on the price. They were the rare type of people who really did want it to go to a good home and weren’t concerned with making a killing on the sale.

So I bought it.  I need a third car like I need a third Airstream, but I bought it anyway, and now it sits in my carport.  And it’s beautiful.  I could sell it tomorrow for double what I paid, but I’m not going to.  I’m going to drive it, and take it to car shows, and listen to the diesel engine with the sunroof open, and when I’m not driving it I’ll keep it under cover in the dry Arizona climate so that it lasts another 26 years. In six years, I might even let Emma drive it.

The only small disappointment in this is that I had expected to find a car far away, at least in California.  Part of the thrill of the kill is dragging home the prize. I had envisioned a wonderful one-way bonding roadtrip, just me, the car, a sleeping bag, and the open road.  A breakdown along the way would have made a good story, too.  But this trip back to the cave required only fifteen minutes (plus a stop at the DMV for a Historic Vehicle plate).  After I get the oil changed, I’ll have to invent a trip just for the sheer pleasure of it. 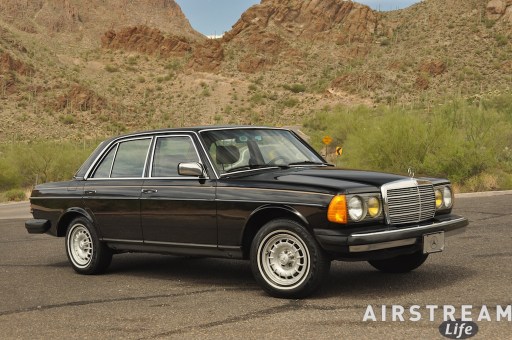