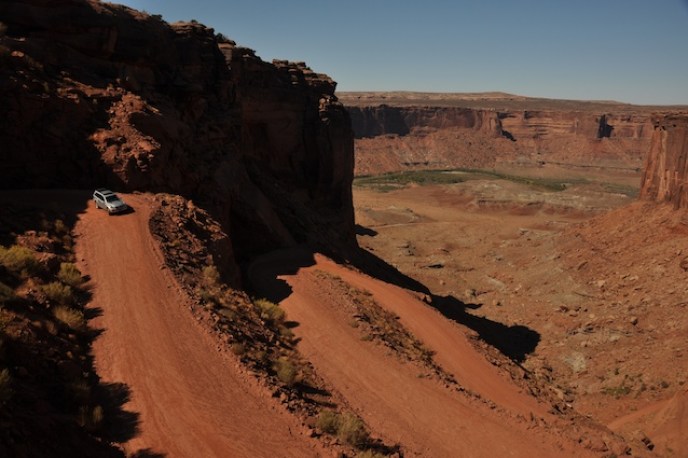 Staying a third night at Horsethief campground turned out to be a good move.   Eleanor’s   back was not ready for backpacking, but just a short distance from the campground was a 12.9 mile dirt road (Mineral Road) that led through BLM land to Green River just west of where it enters Canyonlands National Park.   This road is favored by mountain bike touring groups.   They start at the Rt 313 end (8 miles from the Visitor Center of the park) and cycle to the edge of the canyon, then get a ride back.

The sad thing is that they see the least interesting part of this long dusty road. It rolls up and down across a fairly featureless scrub plain with almost no canyon views until the very end.   But just a few feet further, the road becomes an adventure, zig-zagging down into the river canyon to the banks of the Green River.   In the photo above, you can see us starting the trip down.

This road is much easier and more civilized than the Shafer Trail, and easily twice as wide in most places, but there are still a few tight and “interesting” spots to keep you awake.   It might look smooth and easy from the picture, but that’s deceiving — 4WD is a very good idea and don’t expect to go more than about 8 MPH at any point.   Still, it’s a drive almost anyone who is not terrified of heights can make. 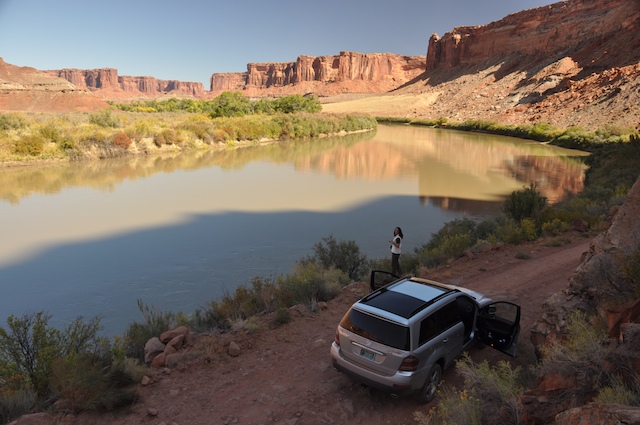 At the bottom you have a choice: left to follow the river, eventually to enter Canyonlands and the White Rim 4WD road; or right one mile to the Mineral Bottom boat launch.   We tried left and explored along the river for a while, then turned around after a few miles and went to the boat launch for a picnic. Rafters launch here for multi-day trips.   A few miles from this point, the Green and Colorado Rivers meet in a confluence and then begins some of North America’s greatest whitewater rafting, so I’m told.   The group we saw departing was off for a week, heading all the way to Lake Powell. 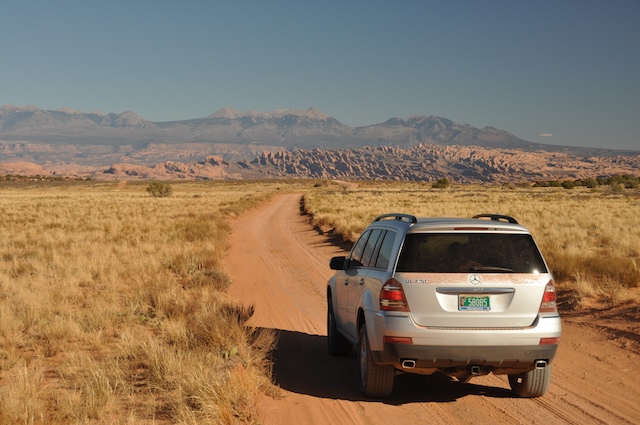 Once back, we decided to check out the Gemini Bridges, also near the Horsethief campground.   No 4WD needed for this trip, since it’s just a typical dirt road most of the way.  The Gemini Bridges are a pair of natural sand stone bridges that you can walk over (or beneath if you approach by a different route) — well worth the trip off pavement to explore. The hike from parking lot to the bridges is only a quarter-mile or so.

We left the Canyonlands early this morning, spurred on by the need to get to Cortez CO (150 miles away) before the post office closed.   Before departing Cortez I felt the need to pick up some diesel and ventured into a Shell station that I shouldn’t have.   Normally I check carefully before turning into a station but in this case the sun was right in my eyes and I couldn’t determine the situation clearly until we were committed.  Of course, it was one of those impossible arrangements for trailers, and we got wedged in between some pumps and the building.

What to do?   Well, first, may as well fill up.  So we did that, and evaluated the situation while the pump was running.  There was no chance of proceeding forward, and no room to back up.   We’ve been in tight spots before, and one thing I’ve learned is that you never panic, and always remember that other cars can be moved.  Eleanor got out and started negotiating with a guy parked behind us so that we could carefully back up into his space. Then another parked car moved and we were able to start see-sawing back and forth to straighten the trailer a little.

To escape, we needed the cars in the middle pump aisle to clear out entirely.   This was tricky because the gas station was very busy, and clueless people in little cars kept zipping in and out.  Meanwhile, the owner of a Porsche Cayenne seemed intent on not merely washing his windshield, but detailing his car right there at the pump.  Once he finally cleared the aisle, Eleanor stood blocking the entry.  I maneuvered the trailer a little more — veeeeery carefully — to both get a better starting position and to intimidate anyone foolish enough to try to slip past me.  A little more negotiation ensued, and soon the next car left. Vroom!   We were outta there.

And of course as we drove through Moab, we passed at least three other stations with wide open spaces for big trailers and diesel fuel for five cents less per gallon…