You are here: Home / Current Events / It’s the end of the mall as we know it

The economy is collapsing and it’s partially my fault.

You see, for the past three years I wrote about how happy we were in the Airstream, traveling full-time and living cheap. We didn’t buy much, we didn’t throw much away, and we were happy with less stuff in our lives.   We were free of the trap of consumerism, having less and enjoying life more.   And this was bad.

Bad because apparently, other people listened.   They listened to me, and to Reverend Billy of the Church of Stop Shopping, and the people who advocate “Buy nothing day” the day after Thanksgiving.   They listened to newspapers and TV stations too, who told them that we were all going to consumer hell this year, and consequently people slowed down their shopping and now we’re all in economic quicksand.

I will admit that I was happy during our three years of minimalist living.   Heck, it took that long just to get rid of the surplus stuff we’d acquired during a dozen years of homeownership.   (We’re still using up the last of the hotel soap collection.) In those three years we had less each year than the year before, and we liked it.   Life was simpler, we didn’t have to worry about money nearly as much, and we didn’t waste energy coveting or caring for expensive things. 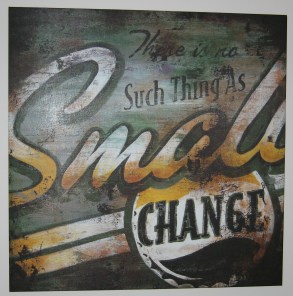 But now my frugal message has come back to haunt me.   Earlier this year people started to think twice before buying big-ticket items, and the toys went first.   That meant RV sales slowed down.   Manufacturers of RVs started dying (Nu-Wa, National RV, Western RV, Alfa Leisure, Weekend Warrior, Pilgrim International, Travel Supreme, Ameri-Camp).   All the rest have cut back production and laid off staff.

Then the OEMs who supply parts to the RV industry slowed down — things like vent fans and hitches.   And so all the OEMs called me up and said, “Sorry, but things are slow, so we’re canceling our advertising program.”

Ouch. We just lost another one this morning.   It’s very frustrating when you lose customers, even more so when they are long-term customers who love your product but are just hitting hard times.   It’s downright scary when you realize that if too many more of them bail out, you will be next.

So I take it back.   I didn’t mean it.   Buying stuff is really fun, it’s educational, it will make you sexier and improve your skin quality.   Especially if you buy things for your RV.   You need stuff.   Stuff makes the world go round.

Perhaps it’s not all my fault, however.  It’s very popular to blame “the housing market,” as if the houses themselves were somehow at fault.   Apparently those houses were building themselves into a frenzy, and they told people to buy them for ridiculous prices on speculation, and encouraged people to take out huge loans against theoretical value.   Then those darned houses decided not to perform anymore and tipped over the world economy.

At least, that’s what the Administration is claiming.   The banks, the mortgage companies, the developers, the speculators, and all the regulators from the local to federal levels were just victims of this terrible, house-instigated tragedy.  As were those of us who took out huge HELOCs to buy even bigger flat-screen TVs.   At least, that’s the theory.

I have a little trouble buying that, because in many ways the decline of consumerism has been forecastable for a while. “Is the mall dead?” asks Newsweek, citing the fact that 2007 was the first time in 50 years that a new indoor mall didn’t open somewhere in the country.   It’s one of many signs that our society has peaked in its interest in buying stuff.

The idea that we could just endlessly increase our consumption to drive the economy was fun for a while, but in the end it is just another Ponzi scheme doomed to collapse eventually.   In addition to selling stuff, you’ve got to build value, not just keep landfills busy.   Besides, economics aren’t just numbers, they are the result of human behavior, and in this case we have a huge wave of people called Baby Boomers who are changing the entire world with their economic clout.   Right now they are retiring, which means they don’t buy big houses as much.

But they are interested in RVs, thankfully, and Boomers drove an enormous wave of RV industry growth from 2001 through 2007.   In total self-interest, I hope that they will resume their profligate RV-buying ways very soon.   We don’t have to worry about RV speculation becoming a plague on the economy later.   Everyone who buys an RV accepts up-front that it will depreciate like a car, and they don’t harbor hopes of selling it at a killer profit next year or taking out a second loan on it to buy a house.   It actually makes a weird kind of sense for Boomers to crack that piggy bank 401-K and go shopping for the travel trailer of their dreams.

Incidentally, I suggest an Airstream. Not only are dealers hungry to sell, but each new Airstream comes with a free one-year subscription to Airstream Life magazine.   See, you’ve already saved $16.   Everyone knows that in America it’s not how much you spent, it’s how much you saved.   So go out there and do me a favor: save me.

Even though you’ll be buying something, in the end your Airstream will return more on your investment than any other thing I can imagine.   You’ll find quality of life that is independent of how much stuff you have.   You’ll discover the joy of simplicity and less obligations.   Like us, you’ll find that once you’re out there on the road, less is more.

But this time, let’s just keep that a secret.