I have trouble staying in one place for more than a month.   The southwest is delightful this time of year, with dry and warm days and crisp evenings filled with stars.   Tucson has been just fine in all respects, but with the Airstream sitting in the carport, it seems a shame to miss the opportunity to explore a little more.

Early on Thursday morning I pulled the Airstream out of the carport and headed west.   Eleanor and Emma stayed home to take care of other things, so I was alone to think and observe as the desert scenery drifted by.   Even though our hiatus has not been long, it was a strange feeling being back on the road, both invigorating and yet uncertain.   I’m so used to traveling with my two companions that towing the Airstream alone is always a little uncomfortable.   Why am I doing this?   Where am I going?   But the little things in the desert soon steal my attention, and then I’m looking at every ordinary thing (tractors, dead motels, billboards, farms, dusty roads) and wondering what story lies behind it.   Each thing invites exploration, so the road is never dull even though I’ve traveled it before.

The iPod played a nice medley of music, and each song reminded me of a different place.   I hear Barenaked Ladies and I think of a week we spent in Victor, ID with our friend Rich C.   I hear Squeeze and I’m thinking of humid nights driving across I-10 through the swamps between Baton Rouge and Lafayette.   I hear Blink182 and I’m thinking of a particular week in Tampa.   Some songs lead me to Vermont, others to Mexico, and one particular album always reminds me of a dark early morning when we went to catch a snorkel boat in Maui.   I like having music that reminds me of these places, it’s like an alternate form of memory. 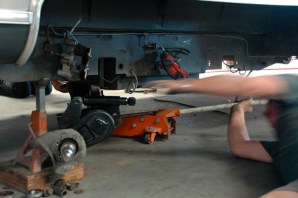 The reason I’m on the road is to get the Airstream a pair of new axles.   It has been sagging a little lately, and that has made it hard to hitch up properly.   A heavy trailer like ours needs to distribute its tongue weight across both axles of the tow vehicle (in this case, our Nissan Armada), and lately that weight distribution hasn’t been what it should be.  I can tell by the way the Armada is starting to sag in the rear.  When the axles on the trailer sag, it messes up the geometry that makes weight distribution work.   It also means the trailer is getting a rougher ride, which is bad for longevity.

In Corona, CA, 458 miles from our home, a business called Inland RV specializes in Airstream axles.   I could have gotten the axles replaced locally, but Inland RV really knows the axle business and they support the magazine with their advertising dollars, which means a lot to me in this economy.   Besides, our two good friends Terry and Marie have recently relocated to work at Inland and I wanted to see them as well.   Terry is a super mechanic and I wanted him to see the condition of all the trailer’s running gear (bearings, brakes, tires, axles) and check for other problems.

We had a mystery squeak coming from the brakes and I wanted him to take a look at that too.   Terry correctly diagnosed the squeak problem before I even arrived, just from the description.   It was caused by a prior service center not peening over little tabs on the outer brake pads, and easily fixed.   Stuff like that makes me crazy — why can’t the first guys do it right?   I’ll drive my Airstream hundreds of miles to find someone who can do the job right the first time, and often I have to. 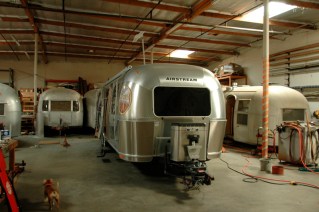 The service work went well on Friday, but I hung around for another night to visit a little more.   The shop has extended me the courtesy of parking in the service bay, which is a peculiar experience.   We did this once before, at Roger Williams Airstream in Weatherford, TX.   Being indoors means that “day” and “night” lose meaning.   It is sunset when the shop closes, the doors lock, and the big fluorescent shop lights are switched off.   There is no dawn until someone comes in.   I awoke in the pitch black wondering what time it was.   It was like a winter morning in the far north, when the sun doesn’t rise for hours after the people do, except that the temperature never changed regardless of what was going on outside. 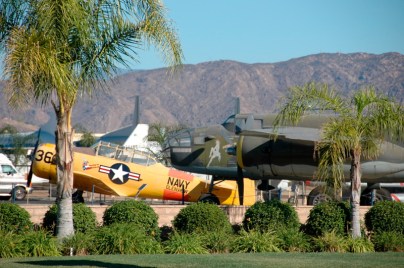 A trip like this has to include at least a little tourism, so we took Saturday to check out the March Field Air Museum.   It’s like Tucson’s Pima Air & Space Museum, but smaller.

Eleanor packed the Airstream with enough food for me to live for a week, and it has hardly been touched because everyone else keeps feeding me.   I’m well-stocked to wander around southern California for a long time.   There’s some temptation to do that, but it’s not the same when I know E&E are waiting for me to return to Tucson.   Aimless wandering is best done as a family.   I’ll go home on Sunday, and instead plan the next big trip, which I suspect will happen — based on prior history — in just a few weeks.