Writing a guidebook is not really such a bad job, unless you, for reasons that cannot be fully explained here, have a deadline to complete the entire thing in three weeks. Then it’s an exercise to see how long you can stand to (in the words of Hunter S Thompson) work like a sleepless ferret, and still produce readable prose.

Not only readable, but accurate. These days, in the era of e-books, anyone can be a publisher, and sadly there are a lot of guidebooks available now that lack reliability and comprehensiveness. So I spent the last three weeks gorging on information and attempting to become expert on the intricacies of the Interstate motorhome, while typing out pages as quickly as I could.

So my blog stories of the Interstate trip suffered, but the good news is that I finished the first draft of the book last night. It’s off to my illustrator, and then I’ll run it past a few folks at Airstream and Airstream dealerships for fact-checking.  With luck, the ebook can be out in September. It will probably run about 80 pages long in the final version. I’m just glad it’s off my desk and out of my head, so I can think like a normal person for a while.

I owe you a conclusion to the blog series I started.  After I finished coastal Route 1 I headed up to spent a couple of nights in friendly driveways in the Silicon Valley area. I have a few friends up there, and one of them had a nice long fenced-in driveway in Los Altos that was just perfect.

After that I took the inland (101) route back to the Murphy Auto Museum Oxnard and spent the Fourth of July having dinner in Malibu with a friend.  I’ve never been to Malibu before, but now that I’ve had a chance to see some of the spectacle there (lots of elaborate parties going on, and the people-watching was fantastic) it’s possible we’ll make another visit as a family someday.

On Saturday the fifth I took the Airstream down the coast to San Pedro (where the cruise ships depart Los Angeles) to meet some other folks. I got there a little early, so I found a spot in a Home Depot parking lot where a Mexican food truck was making quesadillas, and had a casual lunch in the Interstate under the shade of some trees. At this point I was feeling completely at ease with the motorhome; we were a team of urban explorers willing to go anywhere.

Tom M, a friend and blog reader, wrote in to ask:

– Was there anyplace that it was too big to park?

Well, yes, you can’t fit a 25-foot motorhome just anywhere. Some friends I wanted to visit in Sunnyvale CA had a driveway that was less than 25 feet long, and HOA rules about “oversized vehicles” being parked overnight on the street, so I stayed in Los Altos and they picked me up. But in Veterans Memorial Park in Monterey CA, there was a rule supposedly prohibiting vehicles over 23 feet or so.  Half a dozen white box “Cruise America” rental motorhomes were camped there, all much longer than the limit, so I found a campsite that fit the Interstate and spent a peaceful night. Otherwise, I took it just about everywhere I wanted.

– Was it a hassle to pack-everything-up when you wanted to take day trips from the campsite?

Not for me, but then I was traveling light & solo. You can’t really spread out a lot in a B-van, so getting ready to break camp was mostly a matter of doing the dishes and tossing a few things into cabinets. I was usually ready to go in less than 10 minutes. Your mileage may vary.

The portability of the machine was its best feature, at least to a guy who has spent the last nine years in a rig 53 feet long. I took every opportunity to park it in places I’d never go with our 30-foot trailer, including parallel-parking on the street in Santa Barbara, pull-outs along California Route 1 and Tucson’s Catalina Highway (pictured below), grocery store parking lots, and undersized campsites.

Perhaps my favorite stop was on the coast north of Malibu at Point Mugu. I would have spent the day there if I didn’t have an appointment later that day… 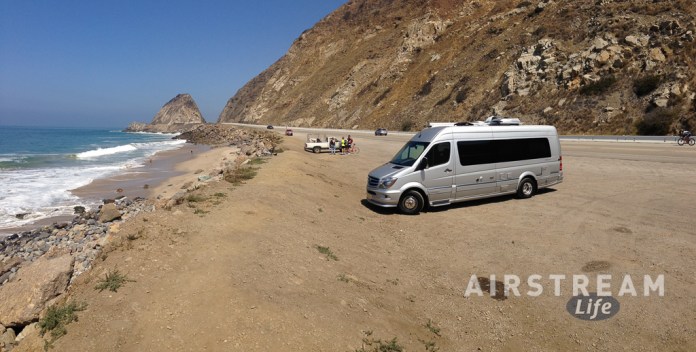 After finishing business in Los Angeles, it was time to head toward home. My conundrum was where to stay.  All week I’d been wrestling with this: toward the coast it was pleasantly cool but the holiday travelers had everything booked up in advance, while inland I’d find plenty of uncrowded places to stay–all of which would be scorching hot. So leaving Los Angeles was bittersweet.

I finally opted for heat, but with a compromise.  North of Palm Springs is the Morongo Casino, which offers free overnight RV parking. Being a little higher in altitude and not quite as far into the Coachella Valley it was not terribly hot (by my standards) which meant a night around 80 degrees. It wasn’t practical to run the generator all night for air conditioning, so I just lived with it.

The next day was my torture test for the Interstate. Seven hours of driving through 100+ degree temperatures, at 75 MPH most of the way, including a 1000 ft climb where the road signs say to turn off the air conditioning or risk overheating.  The Interstate was impressive, and I got 16.0 MPG despite the fast drive. It was too hot in the back, where the dash A/C couldn’t reach, so at one point I ran the generator and the ceiling air just to see what would happen. (It worked fairly well.)

I spent one night at home in Tucson, then took a day to drive up to the peak of the Santa Catalina Mountains to get caught in a thunderstorm, then drove the Interstate to a meeting in town (again no trouble parking) and finally spent the night in Casa Grande AZ before dropping the motorhome off in Scottsdale in the morning. Total: 1,600 miles of driving in ten days. 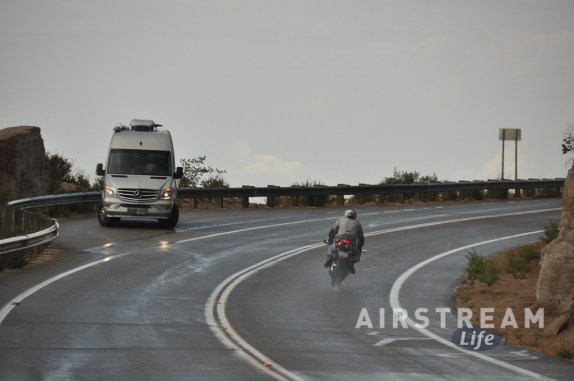 I’d do it again in a heartbeat.  This was a fun trip. People who drive these things really have an interesting range of opportunities available to them. Obviously you give up a lot in terms of space, but on the other hand you get a lot of flexibility.

In fact, I’m hoping to get another shot at it later. Airstream is bringing out a new B-van in September, to be called “Grand Tour,” and it is supposed to be more camper-ish (less seating, more space for living).  I want to get my hands on it. That’s going to be difficult for a while, since production will probably be limited and I expect demand to be high.

Now that the Interstate trip is over, and the book is mostly done, what’s next? Tomorrow I fly back to Vermont to be reunited with my family, and in a week or so we’ll start the next adventure, our 3,000 mile trip back to Arizona, via Ontario.