You are here: Home / Airstream / Maintenance / Renovation / Safari so good

We’re still working on the Safari and I’m watching the calendar now.  We’ve got about a week before it’s time to head out for the next trip, and in that time we need at least five days to clean and re-pack the trailer.  That may seem like a lot of prep time, but it’s always complicated when you travel as a family, with a chef, and with an office.  If we were childless, ate out for most meals, and didn’t have a business, packing would be much simpler but our travel would probably be less interesting too.

Having about a week to go means I need to get the projects wrapped up or at least in a condition where Eleanor can work around me.  Right now the Safari is cluttered with tools and supplies, and there are still small items to be resolved.  These “little things” always take more time than they should, it seems. 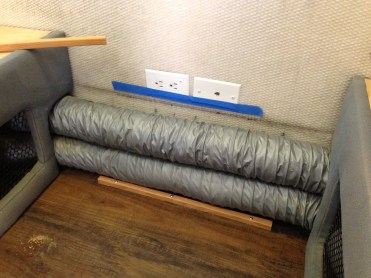 For example, on Thursday we reinstalled the furnace chase that runs between the dinette benches.  This is just two pieces of plywood stapled together to form an “L” that covers up the furnace ducts.  The problem with this job was that Airstream originally nailed the chase to the floor and to the wall, then stapled the wood together.  When we removed it, we had to pull the nails and I couldn’t re-nail it without also pulling the staples (and potentially ruining the piece).  So the best fix was to cut new wood braces (one of which you can see in the photo above) and screw them to the floor.

I found a scrap of Douglas Fir and cut two pieces to be the braces, then drilled holes, then screwed them into place. Then we screwed the chase to the wood braces with #8 screws and finish washers.  Now, if we ever need to get in here again, we can remove the chase in less than a minute.

This isn’t a hard job, but in the end the whole thing took about 30 minutes, and it was just one of many “little things” that the Safari will need before it’s ready to hit the road again.

Another little job was to make the new entry door threshold from Black Walnut, to match the new floor.  I cut and shaped it on Friday, and sanded and finished it with several coats of polyurethane on Saturday.  Because the floor wasn’t even across the threshold, it took about six or seven test-fittings and careful sanding (first with 100 grit, then with 220 grit) to get it to be an exact fit.  This project probably consumed another hour or so, but I think the end result was worth it. In the images below you can see the original oak threshold and then the new walnut one.

The white wall covering in the Safari is looking pretty ratty.  It’s a fabric that approximates the fuzzy side of hook-and-loop fastener, and in fact Velcro will stick to it very well.  This stuff gets black marks from any kind of aluminum abrasion (such as screws or rivets moving on the wall during travel) and that black stuff is aluminum oxide.  It’s extremely hard to clean.  The white fabric also picks up dust, stains, and lots of other things, so the long term result is that it looks terrible.  The only effective way we’ve found to clean it is to use a product called Dealersol, which you can’t buy at retail.  This is sort of like dry-cleaning liquid: it mysteriously picks up horrible stains and they evaporate in a cloud of unhealthy Volatile Organic Compounds. It smells for a few days and probably causes a dozen fatal diseases in lab rats, but it does work really well.

Since we can no longer obtain Dealersol or anything like it, we tried a simple Rug Doctor with the usual cleaning solution, and it had no impact at all on the stains.  So at this point we are stymied.  The white fuzz can’t be removed because it is strongly adhered to the aluminum interior skin.  Even if peeled off, a significant adhesive residue remains on the aluminum.  I’ve tried cleaning the adhesive off, but it takes other nasty chemicals and the walls never look good even after many hours of effort.  So it seems our walls will continue to show their years of use, until the day comes that we are going to gut the trailer and replace the interior aluminum wholesale.

(Believe it or not, I’ve done that before.  Long-time Airstream Life readers may remember Project Vintage Thunder, in which Brett & I gutted and refurbished a 1977 Argosy 24 including removing most of the interior skins and replacing them with shiny new aluminum.  The results are very nice, but it’s definitely not a weekend job.)

Setting that problem aside, I decided to push forward with the new cabinetry project.  For several years we have had a combination laundry/microwave cart that we rigged up with an off-the-shelf chrome wire rack and a sheet of white Melamine plywood.  It has worked but we could do better.  I’ve had thoughts of building something more permanent and more functional.  We’d like to have a bigger space for collecting recycling, a bigger and more secure spot for a microwave oven, and more space for shoes by the door.

The recycling requirement might strike you as odd, but we recycle extensively at home (about 75% of our household waste is recyclable thanks to a really excellent program in Tucson) and we hate to toss out glass, paper, and plastic when we are traveling.  The problem when traveling is that it can be a long time between recycling opportunities, because most campgrounds don’t offer recycling.  (This is a travesty in my opinion.  RV’ers already have the reputation of being resource hogs.  Here’s a great opportunity for the industry to improve its image and they ignore it.)

So the new cabinet design I’m working on will allow convenient and roomy space for those things we have that Airstream didn’t build into the trailer in 2005.  The end result will be fairly simple, just some shelves and a top, but it will be a big improvement for us and it will be an interesting challenge for me.  On Saturday I went out to get supplies for this project, and Eleanor and I removed all the furniture on the curbside of the trailer including the interior wheel well cover, and then I did some measuring and thinking about how it should all go back together.  More on that later this week.

Today we are expecting courtesy parkers to arrive, our friends Kyle, Mary, and Kathryn.  I expect some upheaval, as Kathryn and Emma are deeply bonded by common interests and attitudes of 12-year-olds, and of course we’ll want to do what we can with Kyle & Mary while they are here.  Still, I’ve got to work on this cabinet project every day if there’s any chance of getting it installed in time for the upcoming trip to California.  It should be an interesting week.