You are here: Home / Airstream / Caravel / Too much plumbing history

Like all projects, the Caravel plumbing replacement moves forwards a little unevenly—a few hours one days, and a few minutes the next.  Yesterday I got less than an hour of work done on it, because I was tied up most of the day with other projects, the kind that pay for this project.  The major accomplishment was screwing down the water pump and neatening up the wiring with some new butt splices. But although there wasn’t a lot of visible progress made, I was happy to take some time to think about the remaining plumbing to figure out how best to correct it.

There were two major puzzles to solve.  The first was the city water fill.  I had made some incorrect assumptions, namely that the original 2.75″ round filler was no longer available as a modern part, and also that it did not have a check valve.  This lack of a check valve was a major annoyance, since it meant that anytime the fill was not capped tightly our water would pump out it and onto the ground.

Because of those two incorrect assumptions, I had bought a modern Shurflo city water fill for $30 to replace what we had.  It comes with a pressure regulator and check valve built-in, all very neatly package but considerably larger than the original. I would have to enlarge the existing hole to 3.75″, and that gave me pause.  Anytime you have to cut an Airstream’s skin, you should take a day or two to think about it first.  It doesn’t heal itself. 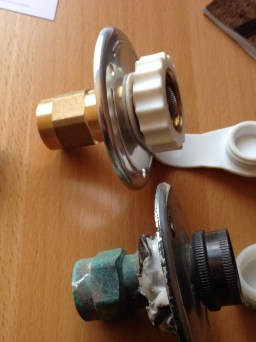 Colin set me straight on this.  A replacement for the original filler is available, and it does have a built-in check valve.  (The original one did too, but the check valve failed many years ago.)  I found it for $12 at Camping World.  It’s Valterra part # A01-0172LF. You can see it in the photo, just above the original one.

The only problem is that the replacement unit takes three screw holes, and the original took two holes, so I’ll have to drill a couple of new holes.  I can live with that.  The old holes will be hidden behind the aluminum flange of the filler, and sealed with caulk.

Space inside the trailer closet to attach the plumbing to this filler is very limited.  For some reason, it was installed next to the black tank and so there are only 4 inches of clearance to work in.  If it had been installed just a few inches forward on the trailer body, there would have been plenty of working space.  This is one accessibility issue that I can’t rectify (at least, not without patching one hole on the skin and making another).

After some visualizing, I realized that it would be simple to put a 90-degree elbow on the inside of the city water fill so that the water line goes upward and then via an 18″ loop of clear flexible line (to absorb shock from city water pressure) to the closet manifold that we installed the day before.  This design also has the advantage of self-draining if the trailer is ever winterized again.  To do this, I need a special elbow that goes from pipe thread to PEX, and I couldn’t find one locally so I added it to another order from PEX Supply and will get it next week.

The second puzzle was how to re-route the plumbing to the water heater so that it would meet the design goals of (a) easy access for future maintenance/repair; (b) neatness (so we’ll have more usable storage space), and (c) reliability.  From a reliability point of view, I’m not a fan of the typical winterization valves sold in RV stores.  I like the way Airstream does it instead, with a very clear winterization bypass and three shut-off ball valves.  It took me a while to figure out a neat solution, and when I did I realized that the project will require more shutoff valves than I had ordered, so that went on the next order as well.

Since a major chunk of the project is now on hold for parts (which won’t arrive until sometime next week), the next thing to do was to rip out the rest of the plumbing, since I no longer needed it to understand what was going on.  The stuff that was left was frankly depressing to see and I was glad to get it out of there. 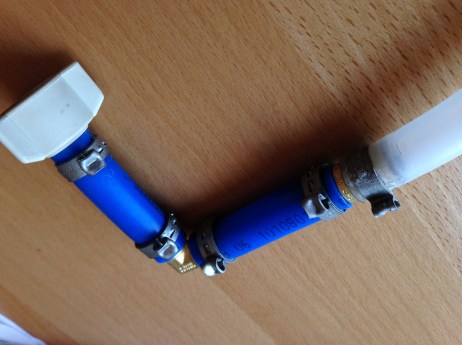 The most interesting bit was this (above).  This was a repair done by an Airstream shop to a section of PEX that was leaking at the fitting.  The fitting was leaking because it was installed without an elbow and thus had been overstressed.  The mechanic put in the blue section of PEX that you see, using steel clamps. This is a reliable system, nearly equal to the copper crimps. 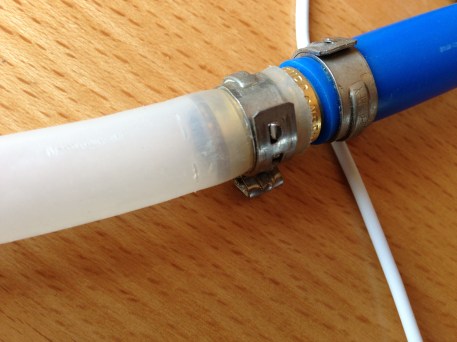 The repaired section was fine, but the pinhole leak we found before Alumafiesta occurred right next to it, in the first 1/4″ of the white PEX, just past the clamp.  Why?  It appears that something (a fitting? a clamp?) cut into the white PEX a little bit.  It’s barely visible in the closeup view above. The mechanic should have trimmed off the last inch or so of white PEX to ensure good material, but for whatever reason he didn’t, and so this last inch sprang a leak when subjected to city water pressure.

This may help explain why I decided to just gut the entire system and replace it with new.  There’s too much history in this system.  I want a “no stories” plumbing system.  If something goes wrong, I will have to blame myself but also I will know exactly how to fix it, and that’s infinitely more satisfactory than being bewildered while cursing some anonymous prior owner or mechanic.

Even while waiting for parts I can still do some work on the bathroom sink plumbing and get started on the winterization bypass for the water heater, so it’s possible I’ll put a few hours in over the weekend.  Otherwise, expect updates next week.