You’d think that after weeks of delays we would be ready to go, but it’s never easy.  Eleanor had too many things on her “to do” list the past few days (including finishing the curtains) and despite heroic efforts we ended up with a late start of 11:30 a.m.  This was a big problem because I had planned a 380 mile drive and now we’d be arriving at night, which is never ideal.

I considered going an alternate route (the Interstate), but that would have completely trashed our planned scenic drive and the choice of campsites along the mid-New Mexico section of I-25 is pretty poor.  So we got in the car and headed toward I-10 (the mandatory part of any eastbound trip from Tucson) and I figured I’d think about it for a while.

Except that we started having other problems right away, which were distracting.  First I got a warning from the car: “TRAILER TAIL LIGHTS OUT”.  I’ve seen that one before, and it has never been a tail light outage. It’s always the result of corrosion on the 7-way trailer plug.  After sitting in Vermont in the high humidity, the copper connectors get very tarnished.  We’ve had quite a few good thunderstorms this summer in Tucson too, which haven’t helped.  I unplugged the connection, gave it a perfunctory cleaning, and plugged it back in.  Problem solved.

But it wasn’t.  The Prodigy brake controller began acting funky.  It is very sensitive to mis-wiring or poor connections, usually flashing “n.c.” when the connection is loose.  This time it reported “c.” which means “Connected—all is well” but when I pressed the brake pedal it refused to activate the trailer brakes.  Nothing happened.  Normally it would report the number of volts being sent to the brake, but the thing just kept saying “c.” at me like it as being willfully stubborn about not wanting to work.  Then it would flash a brief moment of voltage, and go back to doing nothing.

It also began reporting that it was off-kilter intermittently (which shows up in the display as “–“).  The accelerometers in the Prodigy require that it be mounted within a certain range of angles.  It has been mounted in the same position for three years, so I knew it was correct, but today it decided that maybe it wasn’t.  All of these odd behaviors baffled me, and I began to think that our trip was going to be delayed while we went 20 miles out of our way to go buy a new Prodigy.

Then the car reported “LEFT TRAILER TURN SIGNAL OUT,” and I decided the whole thing was the result of crappy corroded connections.  So we stopped and I broke out some emery cloth and very meticulously scraped all the connectors on the 7-way plug until they were at least a little shiny.  Ten minutes later, we were on the road and all the weird symptoms stopped.  I need to do a more thorough job later with something better than emery cloth, and perhaps a little liquid electrical contact cleaner.  Otherwise I’m sure the problem will re-occur after another few rains.

With all going well at last, I decided to stick with the scenic route plan.  The real trick with scenic routes is to remember to fill up the tank before you get into the remote country.  We made a stop in Safford AZ (about 170 miles into our drive) to get 14 gallons of diesel and a few hours later in the boondocks of New Mexico I was very glad I did.

One highlight of the trip was Mule Creek a.k.a AZ-NM Rt 78.  The road winds a bit and there is a 40-foot restriction on trucks and the speed limit drops to 30 for much of it, but it was beautiful and worthwhile.  Then we picked up Rt 180 northward (a little bumpy and uneven in spots but generally OK), and then Rt 12 to Rt 32 to Rt 36, which are good roads.  All the while we were climbing, eventually peaking out at 8,200 feet, and as the sun dipped lower and summer thunderstorms drifted along the horizon we enjoyed fantastic skies and rainbows all the way. 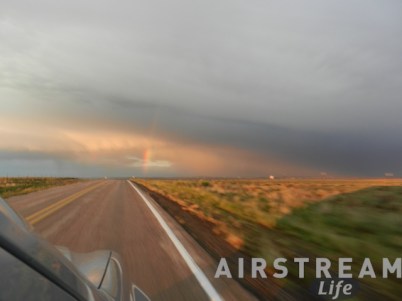 I was racing against time but you can’t really go terribly fast along this route.  60 MPH was about the max, and most of the time it was 50 or 55.   When we got to our final leg on Rt 117, the sunset was upon us and the light began to get dim.  Still, we were treated to some really great scenery along the edge of El Malpais National Monument and the Acoma Reservation.  Rt 117 demarcates the border between these two properties. Along the southeast are impressive bluffs of sandstone, and to the northwest are plains studded by volcanic mountains.

Our stop for the night is a little BLM campground along Rt 117, called Joe Skeen.  It is free and provides no services at all except for pit toilets.  It’s barely marked at the roadside, and the entry road is rough.  I figured that being mid week it would be empty, but we were surprised to find most of the spots taken by tent campers.  Only two sites were left, both of which were drastically unlevel.  It was almost completely dark at this point, and I couldn’t see Eleanor at all when she tried to help me back up, so we finally left the Airstream cocked in a campsite with all of our leveling blocks under the curbside wheels, and called it “good enough”.  It was a messy parking job but there seemed to be no other place we could go in the campground that would be any better.  Even with a small mountain of leveling blocks under the wheels, inside the trailer we still had a little curbside tilt.

Eleanor’s pre-cooked meals are already coming in handy.  She brought out a smorgasbord of leftovers and new goodies (cold chicken, Indian rice, grilled zucchini & mushrooms, etc.) so we were able to eat quickly and keep the dishes to a minimum.   Good thing, since with the time zone change it was now nearly 9 p.m.   I went to bed early, with confidence that we would have a very quiet night in this remote and rustic campground.  The long day of towing for this trip is over, and from here on in our travel should be much more relaxed.