There are a few clear themes of this week:  (1) Everyone seems to be having a great time. I’m getting lots of comments as I walk around the field, all positive. It’s very gratifying.  (2) We are all extremely busy.  A full night’s sleep or a moment to sit and eat quietly are hard to come by, at least for the staff.  (3) We’ve been extremely lucky with the weather (but more on that later).  Photo below is of Eleanor, Brenda, Colin, and Peewee. 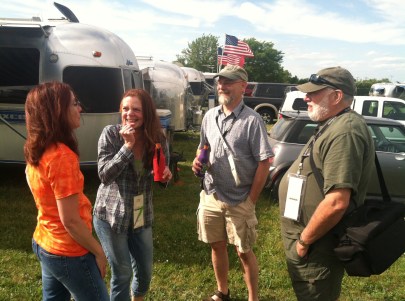 The day started with an early “pranayama” seminar by sKY and slaDE, our resident yoga instructors, while JJ and Sandi did their SkyMed pitch in the Main Tent, then regular yoga class, then the two Product Feedback sessions that Airstream’s top design and sales people run (which were very well attended). The kids did a scavenger hunt at 10 a.m., while Joe led a bike ride for the adults. 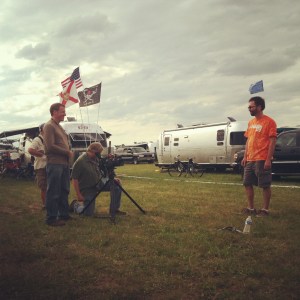 I missed all of that, because a production crew working for HGTV was on site, shooting video for a show to be released sometime this fall.  They wanted to do a short interview with me (in addition to several members of the Airstream staff).  I’m pretty sure my moment of fame will end up on the cutting room floor.  I was also leading three Airstream Life staff through the factory for a future article about the factory tour, so all of this kept me away from the fun that everyone else was having.

The big moment for us was Eleanor’s “million dollar sauces” demo at noon.  She made 10 sauces on an Airstream kitchen in about an hour, while Brett assisted and I did commentary.  At the end, everyone got to taste the sauces.  The recipes can be downloaded from Alumapalooza.com.

Colin’s talk on vintage trailer restoration was also popular.  He managed to keep his crowd mesmerized for 90 minutes, until we finally had to kick him off the stage. 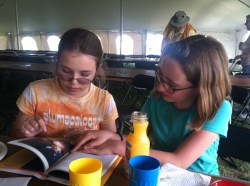 Throughout the past three days we have seen almost nothing of Emma.  She linked up with a new friend, Katherine, and the two have been completely inseparable.  But that’s OK with all the parents involved.  This is a great environment to let a pair of 11 & 12 year old girls run free.  We’re in a small quiet town, inside a fence with security guards at each entrance, and surrounded by hundreds of wonderful Airstreamers.  For some reason the girls have a pact to prevent us from getting pictures of them, but I’ve managed to sneak one or two.

All through last night we were reveling in absolutely perfect weather: 70s, dry, mostly sunny, and a light breeze.  But we knew it had to end.  As I told many people, in Jackson Center during June, you can expect all kinds of weather in a single week.  Today, Friday morning, we have steady rain and a temperature of 62 degrees.  It will rain until at least 10 a.m.  But today (perhaps foreseeing this rain a year ago), we programmed a slow start day, with just yoga, Dutch Oven cooking (under the tent today), and Open House from 10 a.m. to 1 p.m.  The Open House will be a soggy affair but by afternoon this rain will be just a memory.  The Backup Derby should be under clearing skies at 1 p.m., and that’s the event of the day I’m looking forward to the most.